Hello! I have Elise E. Rawls here with us today to talk about villains. AKA antagonists AKA the main driving force or your book's conflict. (Unless your plot is driven by a love triangle ... in which case ... your could probably use a REAL conflict. That's a post for another day.)

I have written a number of different villains in my career, villains of varying sorts. Mindless beasts, time constraints, evil dragons, miserly uncles, and so on. I've even redeemed a few villains. (That's a post for another day, too.)

Elise E. Rawls is the author of a book of poetry, Bleeding Hearts, under the name "Elizabeth Rawls" 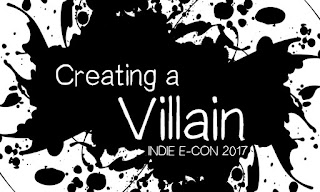 "How To Create A Villain"

Every good story needs a villain, or some antagonistic force. They are the ones who make the protagonist's character grow until they become the hero their story needs, the hero that readers can admire. The villain makes the hero shine; the darkness makes the light shine bright. A story about good people with nothing happening doesn't show us or teach us anything, but a story about good people fighting against evil—now that is something.

So the question is, how do you go about creating this villain or dark force that your hero must overcome? Let’s begin with this: What are the key ingredients a villain needs to have?

1. They must be someone or something that helps move the story forward.
Villains are valuable in this. They are the ones that get the protagonist up and moving so that the story can progress.

2. They must be able to cause problems or obstacles for the protagonist.
Without obstacles, the protagonist wouldn’t have much to do through the story, nor would they grow as a person.

3. They must create tension or fear for the reader.
A villain isn’t much of a villain if they don’t evoke some sense of fear as the reader reads.
Now that we’ve covered the basic ingredients, it’s time for you to decide on what type of villain or antagonist it is that your story needs. Here is a list of possible villain types to choose from:

The Classic villain, the personification of evil. This type seeks power and control of all things. They have no regard for anyone or anything but themselves, and therefore are willing to kill and destroy all in their path in order to get what it is they want—which typically ends up being the world. (Think Sauron, and Voldemort)

The Redeemable villain, who is bad at first, but near the end has a change of heart. Whether they had once been good long ago, or were always corrupt, their dark ethics and morals may be slowly changed as they watch the protagonist's heroic efforts. Disaster might befall the villain, and it's the hero who saves them, causing them to change.

The Anti-villain, who goes back and forth between doing good and doing bad. They keep you guessing. They might have sympathetic characteristics, which let us care about them now and then, but they are still responsible for doing evil things. (Think Loki).

The Corrupted villain, once good but now evil. This type typically has a sad and painful backstory, and it’s that backstory that has led them to become the evil person they are now. But they could become corrupted in other ways, such as from the desire for wealth or power, making them lose their sense of compassion for others.

The Equal. They are almost identical to the protagonist, except that their ethics and morals are completely opposite. Like an evil reflection in the mirror. (Think Zod from Superman, and Moriarty from Sherlock)

The Mastermind. The brilliant evil person or force that plays behind the scenes of the story. The protagonist might be busy battling minor villains and henchmen, but it's the mastermind who is in control.

The Femme Fatale. The deadly beauty, who uses her good looks to get what she wants. She could be a spy, an assassin, or a thief. But whatever her occupation, her focus is always on herself and getting what she desires.

The Bully. They’re sole purpose is to make the protagonist miserable. They may not have a huge goal of taking over the world, but they do have a goal of ruining the hero’s life. They may not have to be an outright villain to do so, but they are an antagonist that causes nothing but trouble.

The Authority Figure. They are the opposing, ruling force to the protagonist’s will. The one who keeps them from the freedom they seek, and opposes their free will. This could be a teacher, a ruler, a commander, an ancient force—anyone and any force who is in charge.

Force of Nature. Whether it be a hurricane, a treacherous landscape, wild animals, nature can be a deadly adversary for a protagonist to overcome. It has no feelings; it simply exists and will kill you if you aren’t careful. The protagonist must be well equipped to face this foe.

Inner Demons. This villain is the protagonist himself, as he battles with his mind, battles with the demons and darkness within him.

Man’s Greed. In movies like Bambi, it’s humans that are evil and who are hunting them. In Avatar, greed is what leads humans to destroy the Na’vi’s home. But like in Avatar, you could use a human protagonist to counteract the evil being done by fellow humans, and show that not all are evil.

The Beast. Whether it be an alien, or an experiment gone wrong, this villain typically has just one desire: eat or kill everything.

The Machine. Similar to the beast, the evil machine’s goal is to search and destroy. Either it has gained self-awareness and views humans as a threat, or it is an experimental project gone wrong and destroying everything in its path.

Some of these may be considered antagonists and not true villains, as they aren’t all purely evil. So think about if what your story needs is a true villain who does evil things, or an antagonist who may not be evil but is an opposing force to the protagonist.

You don’t have to stick with one type of villain, either. You can mix and mash these types and come up with more complex villains. Perhaps the bully is also the corrupted once-good-now-evil villain? Perhaps the classic villain later becomes the redeemable villain? Possibilities are endless!

Now that you know the essential ingredients for a villain, and what all types of villains there are, look at your story and ask yourself:
What villain will best fulfill my story’s need?
Which one will best move the story’s plot forward?
Which one will make readers cringe in their seats, and fear for the hero?
Do they need to be smart, or crafty, or flexible?
Do they need to be a mindless beast, or a brilliant mastermind?

Be creative, and focus on what your story needs to be the best it can possibly be! I have another post on a similar topic: Make Your Villains Real—6 Tips, over on my blog: https://rawlse.wordpress.com/2015/03/10/make-your-villains-real-6-tips/


Thank you for reading! What types of villains have you created for your stories? I’d love to hear from you.
Knitted by Kendra E. Ardnek at 2:00 PM