Emmazel is written! It releases on Wednesday, and I hope you enjoy this first chapter enough to go check it out. Paperback might be available sooner. We shall see.

Emmazel's chapter 1 contains no spoilers for the previous books. 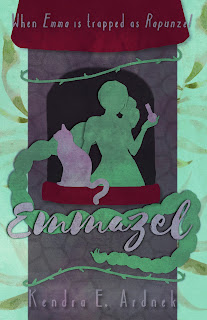 Despite having lived her whole life in a tower, Emmazel had made it to maturity with a reputation of being clever and accomplished. Too clever, if one asked her father. And too fond of love potions.

Thirty-two companions, she’d had during her tenure in the tower, and nearly every one of them was now married into the country’s nobility. Anna was the latest, an older woman who had been a decided old maid. Emmazel had considered her an especial challenge but had still prevailed in the end.

“Emma! Emmazel, child, where are you?”

She sighed at her father’s call, sending one last surge of magic into the coriander she was tending, and then she stood. He had just returned home and clearly wasn’t happy with what he’d found.

“I’m in my garden, Father!” she shouted down the stairs. “It was such a beautiful day. I just had to do some gardening.”

The winds swirled, and suddenly he stood beside her in the room. Her garden was the most remarkable room – for though she couldn’t go outside herself, the roof was made of the clearest crystal, allowing light to pass through and her plants thrived.

“Emmazel, where is your companion?”

Emmazel blinked and glanced about herself, as though surprised that he should ask such a question. “Well, not here, obviously. Did you misplace her?”

“Emmazel, child, you are being meddlesome again, aren’t you?”

“It was another lord, sir,” she declared. “He’d been bothering us for weeks, convinced that I was here against my will, and I just had to do something about it.”

“You used a love potion on the pair,” piped up the black cat who lay sunning himself among her roses.

“Again, child?” Father twisted away, throwing up his hands in frustration, and the wind that followed him rustled through the room with particular agitation. A few of Emmazel’s plants complained, but most were used to his outbursts. “I go to so much trouble to find companions for you, here in your tower, and all you do is trick the poor girls into falling in love with lords and dukes and running away with them.”

Emmazel shook her head, kneeling to tend her plants. “Papa, you’ve forbidden me to leave this tower, so you can’t possibly expect me to have run off with him in her place. What else was I to do?”

“Turn him away! Make it clear that neither one of you is a damsel in distress and that his services are unneeded and unwanted.” Father shook his head in disappointment. “Love is not to be trifled with.”

“And young men who have it in their heads that there’s a helpless young maiden for them to rescue aren’t to be trifled with, either,” Emmazel countered. “You underestimate the power of love, Papa.”

“You meddle with things you don’t understand,” said Father. “Stop herding these poor fellows to marriage with your potions.”

“You do know that the entire reason that girls agree to come live with me is because I’ll help them find a husband of rank?” Emmazel raised an eyebrow. “Night can attest! None would be so brazen to admit it outright when you’re recruiting them, but most have said as much to me. And I make sure to let them know the risks of a love potion, and each is instructed to delay the marriage for at least the six months that it takes for a love potion to wear off. And I hear that most of my girls are quite happy with their lives since. Why, Lady Bellflower sent me a necklace just last month as a thank-you for my help. I assure you, I know what I’m about.”

Father threw up his hands. “As always, you won’t listen to me, thinking instead that you know best. Mark my words, dear Emmazel, and stop all this bothersome trouble before you regret it all.”

Emmazel tilted her head to the side as she considered her father. How old and frail he looked these days! Perhaps she really ought to pay more attention to him, for it seemed unfair for a man to slip away this quickly, and he’d been strong and hale for as long as she could remember.

“I think,” she said at length, “that you’re out of sorts because it’s dinnertime. Why don’t we retreat to the kitchen? Anna didn’t leave us without supper. You, too, Night. Come along!”

She scooped up the black cat and headed down the stairs, knowing that her father would follow. He would also continue his protests, despite the futility.

“You don’t have to bother yourself, good lady,” said Night, squirming in her arms. “I have four legs that work perfectly well, in case you didn’t realize.”

Emmazel laughed and hugged him closer. “But then you might get lost, and just think how distraught I’ll be!”

They sat down around the table, and Emmazel passed around the night’s dinner of vegetables and chicken. All were mindful of the empty chair.

Or, at least, Emmazel and her father were. Night hopped up to his seat and made himself quite comfortable, paying it no mind.

“Good luck with that,” said Emmazel. “There’s no one in the land who wouldn’t like to improve their lives, and marriage is the best way for a woman to do that. Why, even as content as I am, I might be tempted myself if Prince Christian were to stumble upon my tower and suit for my hand.”

“Emma! Emmazel, child!” Father shook his head in distress. “Put such a thought from your mind! You have no need of anything outside the tower. And why would the prince have reason to visit you? I’m certain he’s far too busy doing the things that princes do.”

Emmazel just wiggled her eyebrows as she took a sip of her tea. “You’re quite likely correct,” she acquiesced. “Though, Anna’s husband-to-be is the Duke of Westbrook, Prince Christian’s own cousin. So you might never know.”

“Perhaps, sir, you ought not to worry so much about what Emma does with the girls,” Night suggested. “A fool she might be; at least it keeps her in the tower.”

Father harumphed. “The tower is for her own good, as she well knows. Emmazel is too delicate a flower for the outside world, and I don’t know if my nerves could take it, should she ever leave.”

Emmazel reached over and patted her father’s hand to comfort him. “And with the stories you tell, I shudder at such exposure. So put your mind quite at ease, Papa, and know that I have no intention of leaving the home you built for me.

So long as he lived, Emmazel could never leave her father. Not when he sat there before her, so frail and old. She was all he had, and she couldn’t leave him adrift.

Emmazel sat up straighter, simpering under the praise, even if she had no idea how serious the cat was. He did love to tease her.

“She has flaws enough – which she would do well to remember,” said Father. “Don’t go filling her head with idle praise, cat.”

“Idle? Never!” Night licked his paw as though offended. “But if I puff up her head enough, it might well actually be able to match that braid of hers.”

Emmazel gave the cat an offended huff. She was quite proud of her golden braid, which had never been cut and was nearly twice as long as she was tall, despite her height. She had an idea that the length would be unmanageable if she had to move about outside, but in the tower, it was nothing to worry over. Brushing and braiding it kept her occupied for a good hour each day, besides, and she prided herself on always staying busy despite her confinement.

“She doesn’t need your help with that,” said Father, shaking his head. “Now, I don’t want any of that cake, sitting there under the towel, so I am off to bed. If you want my advice, you would leave that thing alone yourself, my dear. It’s far too rich for this late in the evening. But, of course, you won’t listen to me – ah, Night, is this how children are these days? Always thinking they know best.”

Night paused, a curious expression crossing his face as he sat up straight. “I wouldn’t know, but it certainly seems true of your daughter, sir. I think it comes of her confinement in this tower. It gives her ideas that she knows everything about the world.”

Father stared at Emmazel for a long moment, then turned away. “There’s nothing to be done about that. Alas.” With that, he disappeared from the room, taking his unruly winds with him.

Emmazel narrowed her gaze on Night. “You infuriating cat! You know better than to upset him like that!”

“And so do you, yet you still persist in making your love potions.”

“It’s hardly my fault that men are so obsessed with rescuing maidens trapped in towers.” Emmazel shook her head. “Neither is it my fault that they are so easily swayed by a potion. Why, it’s really only a precaution to keep them from fixating on me.”

“And I’m quite aware that I don’t know everything – how can I when there’s a whole world out there that I have never experienced for myself? But I do know what I know, and you can’t take that away from me, you disagreeable cat!”

“So you say.” Night was done eating, so he jumped down from the table. “Now, you seem to be on your own to clean up tonight. Such a pity. I’d offer to help, but I lack hands.”

Emmazel pursed her lips as she stared after Night. Shaking herself, she wrapped up the cake and put it away. It had been meant as a peace offering for her father, and since that had failed – well, it was better off as breakfast tomorrow. 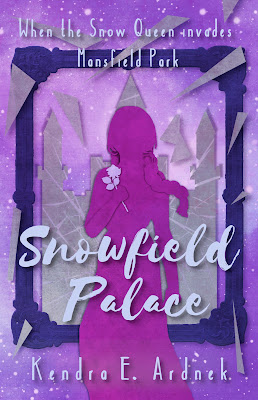 And check out this lovely cover for book 4! It's scheduled for release in December, as part of the Broken Mirrors, which you can check out here - including a sneak peek at the first chapter for anyone who preorders all six mirrors or shares the covers on their social media. It and Rose Petals & Snowflakes are both on sale this week for only 99 cents, so grab 'em while you can!

If you click through links, you may also see that the preorder link is live for Thornrose Estate with a temporary cover. My current plan is to design its cover live when Crown & Cinder hits 100 ratings on Amazon, and it's halfway there, so if you've read it, do pop over and tell people how you enjoyed it, if you can. (I don't know yet on what platform I'll be designing the cover, but it will likely be my Discord server, which you really should join if you haven't yet.)