So, um, this was supposed to go up at 8AM EST this morning, but I kiiinda got distracted by shopping last night and forgot to set up the blog post in advance.

Never mind that, 'cause I'm posting it now. TRICIA MINGERINK HAS REVEALED THE COVER OF HER NEWEST FAIRY TALE RETELLING, COMING THIS AUGUST 6TH!

(And I'm ... actually doing the Golden Braid release that week, so ... SERIOUSLY, TRICA AND JAYE, HOW IS IT THAT WE'RE ALWAYS RELEASING OUR BOOKS AT THE SAME TIME?????)

So I actually just finished reading the previous and first book in the series, Dagger's Sleep, which I bought in Paperback at RealmMaker's last year ... right before she revealed the new, shiny PURPLE cover ... and I'm sitting here trying to justify buying the new edition 'cause my shelves don't have nearly enough purple.

Dagger's Sleep was quite the intriguing retelling of Sleeping Beauty, and has taken a pretty high status in my stack of favorites. A lot of readers take issue with either the worldbuilding or Alexander's attitude in the beginning, but, honestly, I didn't mind either. For the worldbuilding, well, I just assigned it a page in Bookania, and Bookania doesn't have to follow our world's logic, and as for Alex ... spoiled rich royal growing up after he gets a taste of reality is one of my FAVORITE tropes, so I was 2000% here for it. I was a tiiiiny disappointed with ... something that happened in the end (trampling one of my least favorite tropes in a Sleeping Beauty retelling, and one I went to GREAT efforts to avoid in Sew, It's a Quest but ... it was well done, and HOPEFULLY, this sequel will help fix my qualms?)

And, yes, I do adopt random fairy tale retellings and assign them pages in Bookania. My favorite hobby.

So, you're probably me to stop talking about this cover and actually SHOW it to you.


High King Alexander rules the Seven Kingdoms of Tallahatchia—a divided nation on the brink of yet another war. When an invitation arrives from the king of Pohatomie, Alex knows it must be a trap, but could it also be his opportunity to unite the kingdoms?

Daemyn Rand has lived a hundred years, served an arrogant prince, fallen in love with a princess, and lost himself somewhere along the way. He has already died for his loyalty. Will he have to sacrifice his last chance to truly live?

Elara Ashen is a lowly, miserable servant. All she wants is to spend one night in a fancy dress, dancing with the high king. When she is offered a pair of glass slippers, it seems all her dreams have come true.

But dreams have a price, and gifts can be curses in disguise. What will it cost to stop this curse from tearing Tallahatchia apart yet again?

Fairy tales meet the Appalachian Mountains in this adventurous fantasy retelling of the classic Cinderella story. 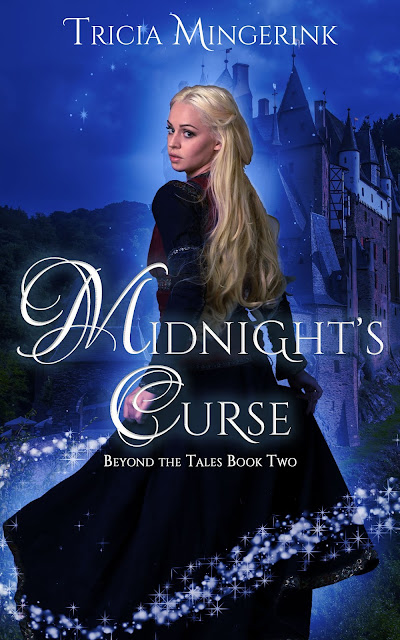 Preorder the Kindle on Amazon.
Add to Goodreads.

Tricia Mingerink is the author of the bestselling The Blades of Acktar series and the Beyond the Tales series. She lives in Michigan with her family and their pack of pets. When she isn't writing, she can be found pursuing backwoods adventures across the country.

You can connect with Tricia on her blog, Facebook, Twitter, and Instagram
To celebrate the cover reveal, Dagger's Sleep, a Sleeping Beauty retelling and book one in the series, is on sale in Kindle for $.99 this weekend!  Click here to purchase on Amazon. 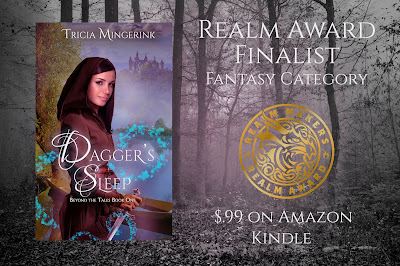 Giveaway!
To celebrate even more, there's a giveaway for a paperback copy of Dagger's Sleep and a 2oz Plot Twist candle by Novelly Yours Candles.

To enter, share the above sale graphic for Dagger's Sleep, the cover for Midnight's Curse, or the below Midnight's Curse promo graphic and make sure you use hashtag #MidnightsCurse and tag @triciamingerink on any social media site to enter.

The giveaway will end May 22 at midnight. Please note this giveaway is only open in the United States. It is not sponsored by Novelly Yours Candles.

Knitted by Kendra E. Ardnek at 9:58 AM No comments:

So, um, so I might not quiiiiite be done writing this little story (just a couple more chapters, though!), but I'm still bludgeoning through with my plan to release it this next August, so I thought I ought to share the first chapter.

And, for the record, I'm still looking for influencers willing to help me promote Honor: A Quest In, so if you're in possession of a Booktube or Bookstagram, shoot me an email and let me know! Details here! 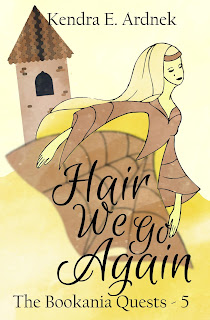 Don't forget to add the book on Goodreads!


“All right then,” said Momma. “Maybe after your nap, but for now, just enjoy your sweet dreams about what that wish will be if and when you find a dack-a-yope.” Then she kissed the top of Maryanne’s head again and laid her in her crib. Maryanne squirmed, but Momma just pulled the blanket over her, told her to be good, then told the nurse to make sure she stayed in bed, and was gone.
Knitted by Kendra E. Ardnek at 10:00 AM 3 comments: