Well, hello. It's late in the day, and I should have posted this on Saturday, but here we are now.

For a couple more hours, you can get a lot of books for free or cheap. Like, 99 cents apiece cheap. And then you can enter a giveaway for the chance to win more books! Yay!

My own offering is The Worth of a King, The Seven Drawers, and Water Princess, Fire Prince, all for just 99 cents. (I also have Red as Snow for free, though that wasn't listed with the thing, as it was a last minute decision.)

There is also a long list of paperbacks for sale at incredibly discounted prices as well! (Though, unfortunately, I wasn't able to do any of mine in paperback, as I've been too overwhelmed to figure that out this year) And the good news is they are all clean reads! Be sure to go check out this amazing sale here.
There is also an amazing giveaway going on! Grand Prize winner receives 20 paperbacks and the 2nd place winner gets 20 e-book titles from the sale for free!
(insert giveaway images)
You can sign up for the giveaway here.
Giveaway runs from November 22nd till November 26th @12AM ET Grand prize open to US winners only. 2nd place prize is open Internationally.

Knitted by Kendra E. Ardnek at 6:58 PM No comments:

7 Reasons to Read Blood in the Snow 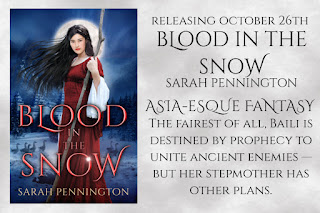 So ... I've kinda fallen behind on these. So ... you're about to be hit with several of them in a row, as I refuse to go out of order.

Without further adieu, seven reasons to read Sarah Pennington's Blood in the Snow.

1. It's freakin' amazing. I'm just going to get that out of the way. This book earned Special Unicorn status in the Rooglewood contest - meaning it got a perfect score from its judge - and it 100% deserved it.

2. IT'S A MASHUP WITH THE GOOSEGIRL. For those of you who don't know, The Goosegirl is one of my favorite fairy tales, and I've been looking for a good retelling of it (I ... didn't care for Shannon Hale's). And this. THIS IS AMAZING.

3. A rich, Asian-esque setting. Also for those of you who don't know, I have a small obsession with Asian culture (like, um, I've actually crushed on pretty much every Chinese guy I've had in my acquaintance, and there's a reason I let Clara and Push au Kim get away with so much), and having a goose-girl Snow White set in this culture was just !!!!!

4. Baili's growth was awesome. She starts out as a bit of a pushover. Or, maybe, a lot of one. Anyways, her maid walks allllll over her, as the book starts out, and by the end of it!!! Well, no spoilers, but by the end of it, this baby is all grown up and saving China! (Or ... not China, I forget what the country was called, but she was saving her country and #excusestoquotemulan)

5. All of the side characters were so awesome and dynamic. Like, they were all so interesting and unique, including the prince, the seven "dwarves," Lanfen, and Baili herself. I don't know how Sarah did it in such a small space, but it was awesome.

6. The magic system. When you think of Blood Magic, you think of evil, right? I mean, that's what I think of. (Though, actually, it was more presented as a Very Bad Idea when I wrote it into the Rizkaland multiverse, not evil per se.) But I really like the way it was handled in this one. More of a "we have this magic in our veins, and we literally have to bleed it out of us to use it." A wee bit creepy, I guess, when I read it like that, but totally awesome.

7. Because that romance is adoooooorable. Just like, adorable. Prince Xiang. Just. Yes. Please. I needed another Asian crush, and he was perfect.

So, yeah. Go buy it. And, while you're at it, go check out the rest of the tour now that it's over and I'm way too late for everything.

Also! Winner of the paperbacks is Kendra L. Which isn't me - my real last name is Roden. I'll be contacting you soonishly to get your address.