So, I'm not sure yet when book 6 of Bookania will be ready for publication - I'm still in the very early stages of writing it (it has a table of contents though!). However, I do have a cover for it, and it's a very gorgeous cover ... and I just don't like sitting on my covers.

So ... I'm going to share it with you now, and let you ooh and ahh, and add it to your Goodreads shelf. 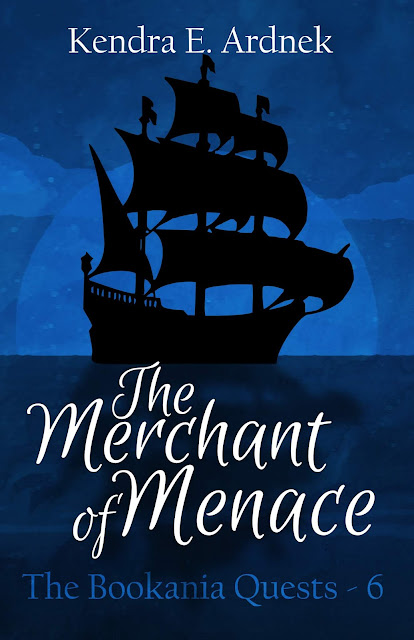 Once upon a time, in a land called Bookania, there lived a girl who was a servant in her own household.

This, for the record, is my favorite Bookania cover thus far. It's exactly how I envisioned it before building it, and that shadow!! Shadows are fun to make.

What's the book about? Well, as you can gather, The Merchant of Venice will be playing a large role. I'll also be paying off a lot of hints and mentions that I've been littering through the previous books (as well as planting more plots, because that's just how I am). There will be Cinderella. There will be the Oddessey. And there will also be pirates. This is a book that I've been wanting to write for a long time, and I really can't wait to share it with all of you.

It's also probably the most low-key on the magic scale for Bookania. There's the existing magic, of course - everyone's gifts will have a part to play, and there may be the granting of new ones - but as far as I'm aware thus far, there will be no flashy curses or other displays of magic as there has been in previous or will be in upcoming books.

No promises on the release date - though I'm going to try to have it written within the year. I've also put Love and Memory at the top of my priority list, and that's an intense book there. (I just started the second notebook, and haven't even finished part 1. Fully expecting 150K-200K out of this baby).

That said, if anyone wants to alpha Merchant for me, I'm looking for 2-3 readers who are willing to read photographed pages in Hangouts and cheer me on. If you're willing (and you've read all previous books of the series), message me at kendraeardnek(at)gmail(dot)com and let me know.

So, go add it to your TBR, and if you haven't yet, download book 1 for FREE (also available on most major ebook platforms, as it's the one book I have wide). I'm trying to get Sew to 50 reviews on Amazon. Not sure what sort of party I'll throw when that happens, but there will be a party.

(Click cover for purchase link)
Add on Goodreads!
I just want to let you guys know that I'm going to be running the exact same giveaway with Love and Memory as I am with the Merchant of Menace. One free paperback for every ten kindle preorders (U.S. Only), just email me your receipt to enter!