Interview with Jaye and Tricia

So, um, this was supposed to go up on Tuesday, but ... see, I had an emotional breakdown on Monday. There's supposed to be a review on this post, and I was going to do the review in video format, but ... while the video is filmed, my brain is just rejecting the thought of editing it.

Terrible, I know. But at least there is an author interview here for you guys to read.

Anywho, I have an interview with Jaye L. Knight and Tricia Mingerink, authors of Ilyon and Acktar respectively.

And they're banding together to promote the releases of the newest books in each series, and let me just say, the two books that I did read were AMAZING. Again, I was supposed to be posting the review here, but ... have an interview.

(Mini review: Bitter Winter and Lacy were both awesome additions to the series, read them now and have your heart torn out and shredded to peices.)


1. Where do you find inspiration?


Tricia: Lots of places, but especially from reading and from camping, hiking, and traveling across the United States.
Jaye: Movies and TV are my main sources. I’m a very visual person. I love watching characters interact with each other. Also Pinterest. :D I can write a character so much better when I actually have pictures for them.


2. What is your favorite thing about each other?
Tricia: Jaye is always so helpful to fellow indie authors. She participates in SO many blog tours throughout the year and was really helpful to me when I was starting out. She has such a giving heart.
Jaye: D’aww, thanks Tricia. ^_^ I love how encouraging and helpful Tricia is too. She’s so supportive of my books and it has been so much fun having such a connected fanbase. One of my favorite memories of the whole last year was sitting at the Realm Maker’s awards banquet next to Tricia waiting to see if one of our books would be the winner.
Tricia: Awww! Yes! That was a great moment at Realm Makers with both of our books up for an award, even if neither of our books won, lol.


3. Eep! Yes, that was such fun. About each other's books?
Tricia: Jace, lol. Don’t have to think about that one too much. And the big battle scenes.
Jaye: Leith! :D Leith is my precioussss. Tricia’s books give me all the feels that I’m sure my books give my readers, so I basically get a taste of my own medicine.


4. I love how your question is basically identical. Who is your favorite authors?
Tricia: Besides Jaye, you mean, lol. Other favorite authors would be Nadine Brandes, Ashley Townsend, Jill Williamson, Morgan Busse, K.M. Shea, Melanie Cellier, and C.S. Lewis, to name just a few.
Jaye: Besides Tricia, a few are Tolkien, Brandon Sanderson, Wayne Thomas Batson, Karen Witemeyer, and Nancy Kimball. But those are just a few. The list could go on for a while.


5. With both your series winding to their end (more or less soonishly), what do each of you have on the horizon next?
Tricia: More or less soonishly is right, lol. I still have 2 more books in The Blades of Acktar to write and release (expected in 2019 and 2020). Earlier this year, I released Dagger’s Sleep, the first book in my new series Beyond the Tales, so I will also be working on the next books in that series as well.
Jaye: Well, I will soon publish my first ever contemporary romance novel under the pen name Jaye Elliot. I plan for there to be two more books in that series, so that’s probably what I’ll focus on after I finish Ilyon Chronicles. Beyond that, I have so many different ideas that I’m not sure which one will rise to the top and demand to be written next. I’m definitely nowhere near done writing fantasy

You can find more posts from the tour here.

Also, giveaway!!!! (I'd tell you to enter at once, but I kiiiiiiinda wanna win it - it's a full set of both Ilyon and Acktar books, and I NEED THEM FOR MY SHELF, SOOOOOOOOO.....) (U.S. Only)

The video review will be posted just as soon as I can pull myself together and finish editing it.
Knitted by Kendra E. Ardnek at 1:58 PM 4 comments:

So, apparently, it's Jane Austen's birthday today. Or it was yesterday, as it will probably be tomorrow before you read it.

And so, to celebrate, I'm going to share an excerpt from Rose Petals and Snowflakes, which is my high fantasy mash-up between Sense and Sensibility and Snow White and Rose Red. Really looking forward to getting back to this story when I get the chance.

Please note that this is largely unedited and may change in the final version. 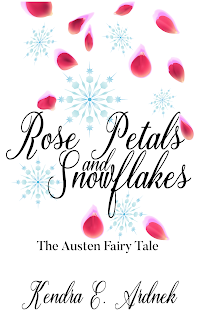 When Elinrose finally stopped for the night, a terrible crash tore the air, spooking the horse that she had not yet tied. The poor steed ran into the woods, with all of the supplies that she had brought with her. And, as she was still staring dumbly after it, it began to rain.
“Well, well, weren’t you ever told that it’s not a good idea to wander into the Forest, Princess?”
It was a man’s voice, and yet, when Elinrose spun around to face the speaker, she saw no man.
She wouldn’t let that perturb her – it was not her way to let anyone know that she was at their mercy. “I seek my brother,” she answered. “And how do you know that I am a princess?”
“You wear the crest of the north country,” the speaker answered. “And I have been following you since you crossed the border – it’s not often that people cross into this territory. Even rarer that they’re allowed to leave. You really should have left your brother alone.”
Elinrose frowned, wishing she knew what this man wanted of her. He had to want something of her, to be talking to her. That was how the Forest worked. Everyone knew that.
“My brother must be returned home,” she answered. “I did not care for the dangers.”
“Then you are not as sensible as they say, Princess Elinrose,” the man answered. “Still, loyalty to your family is to be admired. And there was a time when I was not as sensible as I thought I was.”
Another crack of lighting boomed above them, illuminating the clearing for a split-second, and Elinrose finally beheld the stranger.
A large bear.
She stifled a gasp and took a step backwards, eyes widening. She fought for her composure, though, and stared the beast firm in the eye. “Do you know where I might find my brother?”
If legend and lore were to be believed, this bear could be as easily friend as foe. And he hadn’t seemed to terribly foe-ish, yet.
“I might,” he answered. “How desperately do you wish to find him?”
He was bargaining. Elinrose knew better than to give in to such a scheme – yet what could she do? Her brother had to be found and she was without a horse now.
“I’m afraid that my horse ran off with everything I have of value,” she answered, with a shake of her head.
“Did he, now?” asked the bear, tilting his head to the side. “How unfortunate.”
Elinrose lifted her chin. “Are you patronizing me?”
The bear took a step towards her, giving a growl that sounded strangely – and terrifyingly – like a chuckle. “You have courage, princess. Perhaps I shall take pity on you.”
“I don’t need your pity,” she answered.
“Ah, but you do – and your brother as well,” the bear answered. “So does every mortal soul that steps foot inside this forest. Pity, for they are fools. Come, mount upon my back, and I will take you to your brother. He has sadly entangled himself in a web that will not be easily undone.”
He took another step towards her, and every muscle in her body screamed to run, but she held her ground.
“How can I trust you?” she asked.
He gave another growling chuckle. “You already trusted yourself to this forest, and it is a thousand times more dangerous than I could ever be,” he answered. “You will trust me because you must. Without my help, you have no help of finding your brother – no hope of finding your way out of this forest.”
“And you’re doing this purely out of pity?” she asked.
“Does it surprise you that a bear can possess a heart?” he asked. “Did you not know that our hearts are the largest in the forest? Come now, let us find your brother. If I have heard correctly, your father’s life drains away as we speak. There is no time to waste.”
He was upon her now. Even on his all-fours, he stared her in the eye. And, yet that seemed to reassure her, for though his mouth was filled with teeth sharp indeed, those eyes were strangely gentle. And human.
“You are a trifle large for me to mount,” she pointed out.
“True enough, but we must manage,” he answered. He turned away from her and shifted down so that his belly was against the forest floor.
She grimaced as she took a hold of a large clump of his fur, hoping that she wasn’t hurting him, and climbed onto the beast’s back in a heartbeat. In the rain, the bear smelled strongly of wet dog, and Elinrose knew that her dress was ruined for good.
Fortunately, she’d had the foresight to wear an old dress.
“Hold tight,” the bear ordered, and then he took off at a bounding run.
The forest blurred into a streak of gray-green, and she held tightly to two fistfuls of the bear’s fur, not knowing what else to cling to. He wasn’t complaining, so she supposed that it must be all right. At length, he slowed to a walk, pausing every few moments to sniff the air.
“So, what are you called?” she asked, after a moment. When he didn’t answer, she continued, “Come now, I can’t just call you ‘bear,’ now can I?”
“Bear will do,” he answered. “Now, be quiet. We’re near your brother.”


Elinrose clamped her mouth closed in a frown.
Knitted by Kendra E. Ardnek at 10:10 PM 4 comments: