And now you can enjoy Misfortune's exciting first chapter!

They said that the kingdom of Ablon would never fall – right up until the night that it did.
It should have been a night of rejoicing. It began so – as the queen lay in labor to bring her seventh child into the world and the kingdom collectively hoped that it would be a seventh son, who would embody good luck and prosperity.
None even dreamed that their enemy lurked just outside the city, waiting for workmen to stop the flow of the mighty Ablon river, for which the country was named. When the river was filled with mud, and its old path ran dry, then the soldiers would march along that dry riverbed and into the city.
The city, so wrapped up in its rejoicing, never knew what hit it. And it was hit with slaughter.
The invaders tore through the city, making no distinction between man, woman, or child. Their young king led the march, straight to the palace.
The guards were not prepared for such a force and melted under the attackers’ swords. They reached the banquet hall, where the king of Ablon was raising another toast in honor of the son he hoped his wife would give him that night. His six elder sons were seated at the table together.
They died together.
The conquering king went alone to deal with the queen and her child. It was only a baby. He had nothing to fear from one just born.
A servant had clearly run ahead to warn the queen, for maids stood in position to bar his way. They were easily dealt with. When the king pushed past them, he found the queen seated on the bed, the swaddled newborn in her arms. She glared at him with the fury of a thousand warriors.
But she was only a woman, and weak from childbirth. The king stepped forward with impunity, his sword raised…
“You come to pluck this one from my arms, even as you slew my husband and six sons?” she asked. “And will you slay me as well?”
The king drew short, for something in her tone unsettled him.
“If you surrender the child, then I will let you live,” he promised her.
Her face twisted, but she pushed the child away from her with no hesitation. “Take her. It’s nothing but a worthless girl-child. A daughter of blood and misfortune. She no doubt brought this evil upon us this night. Go ahead. Kill her. It is said that whoso harms a daughter of misfortune brings the misfortune upon themselves.”
The king drew back. Though not a superstitious man, he still held respect for the higher powers. He would test the woman’s words. Raising his sword again, he stepped forward with renewed purpose.
She didn’t even flinch, merely laid the child on the bed in front of her. Even with the blade’s tip pressed against the bundle of blanket, she just stared at the king with that determined calm.
“Why do you hesitate?” she asked. “You’ve killed thousands already this night. What’s one more? A mere babe – a girl-child. Quick now, and run her through. She has been born in blood. Why should she live when her brothers do not?”
The king had never met such a woman – a mother so calloused to the child she’d just birthed.
He withdrew his sword and sheathed it. “A girl-child is no threat to me. I will show her mercy, as well as yourself.”


No emotion crossed the queen’s face, even now. “Very well.”

A Twist of Rapunzel - Cover Reveal!

So this post is late in the day. I probably should have scheduled it last night but ... I had a mess of a weekend and I don't have many brain cells left. 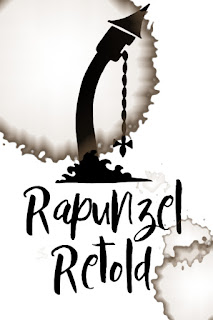 Misfortune, the fourth Twist of Adventure, this one a Rapunzel inspired by the Book of Daniel. It's a super sweet and heartbreaking story that hurt so much to write, and I'm so excited to share it with all of you.

Not only that, but I'm not releasing it on its own, but I found a fellow Rapunzel reteller who wanted to join the party - Kirsten Fichter with #3 of her Once Upon a Twist Tales - Diamond. I haven't read Diamond yet, but I'm looking forward to it as it's directly connected to the previous tale Spindle Dreams and Eep, was that a story.

Anywho. Awesomeness is awesome, and we have a cover reveal today!!!

Diamond leads a quiet life with the woman she calls Mother. There isn’t much to pass the time save for excursions in the forest and one-sided conversations with her pet rabbit, Hobie. Men are cruel beings who care only for themselves and must be avoided at any cost. After all, Diamond’s own father gambled her away once. What other terrible fates might await her if people knew she existed?

Seth Stendahl is an alchemist with a middling proficiency in the Rohesian tongue. After growing up with and surviving six sisters, there shouldn’t be anything too difficult for him to master – except maybe breaking his leg and being locked in the top of a ruined watchtower.

The day she was born, her kingdom fell, and so she was branded the daughter of blood and misfortune and locked away. Now a dragon plagues the land and her curse may be the only thing that stops it.

But is she really cursed?

Both books will be releasing on May 13th, and I can't wait. Blog tour signup will be opening soon, and I will come back later and editing in a link to it. In the meantime, feel free to add both books to your Goodreads TBR and even preorder them!

Kendra E. Ardnek is the self-proclaimed Arista of Fairy Tales. She lives in the Piney Woods of East Texas with her dragon babies and massive herd of mini-giraffes, and she is still waiting for one of of her fifty nutcrackers to come to life and marry her. When not writing, you can usually find her sitting in a random box, and she’s frequently known to act before she thinks.  Find her online at: Website || Blog || Goodreads || Facebook || Twitter || YouTube || Newsletter || Instagram || Amazon


Kirsten Fichter is a twenty-something Christian writer who loves being the wife to her favorite person ever, mommy to two precious blessings, a piano enthusiast, a dragon buff, a serious bookworm, and an INFP synesthete. Fairytales have always fascinated her, and she has made it her goal to rewrite as many as possible and become known as the “Grimm Dickens” (i.e. mixing Grimm fairytales with a Dickens style). Diamond: A Rapunzel Story is her third published fairytale retelling. You can find out more about her on her blog, A Synesthete Writer.