Okay, yesterday just disappeared right out from under me, and I forgot to post the interview with Sarah Allerding, like I was supposed to. (Bad Kendra.)

Anywho, this is for the blog tour for Sarah's newest release, The Swords of Time, which is a delightful time travel novel in the vein of The Magic Treehouse or even Castle in the Attic. 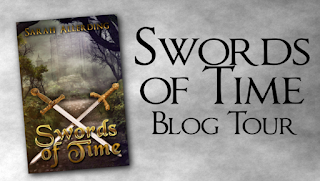 Can you tell my readers a bit about your book and why they need to go read them RIGHT NOW?
The book is about two boys who are sent into medieval times when they find some special swords. The boys have an adventure full of danger and bravery. Will they find the lost heir to the castle before it is too late?

What inspired Swords of Time?
My friend came up with an idea to have twin boys with specific names in a story. The names she chose made me think of writing a book about brothers in medieval times. I chose different names and made the brothers different ages.

When not writing, what can people usually find you doing?
Studying the Bible, spending time with my friends, umpiring baseball, reading, watching movies, cooking, and baking.

Do you know your personality type, and if so, how would you say it affects your writing?
I have gotten both INFP and INFJ on personality tests. I would say my personality affects my writing the most in the way I develop my characters.

What's next on your horizon?
I have a a few books started. One is the second in the Rainland series. I am hoping to get one of the books done this year.

Braden has one goal: knighthood.Unfortunately, he lives on a horse farm in modern day America with his uncle, his younger brother, and an aunt who absolutely hates him.Against all odds, Braden and his brother, Jamie, stumble across a pair of special swords that sweep them back into medieval times. They land near a castle whose lord has a task for them.His older son is lost somewhere in time, and only someone who can control the Swords of Time can save him.With the goal of knighthood suddenly in sight, Braden's not sure he wants to leave, but he wishes to impress the lord. Can he protect his brother, find the lost heir, and fulfill his dreams, or will the lord's younger son ruin everything?

So, hello there, internet.

I have no focus. BUT I DO HAVE AN EXCITING NEW WRITING PROJECT THAT I'M WORKING ON.

It's called The Austen Fairy Tale, and, as you probably can gather, it's a collection of mash-ups between Jane Austen's six novels and classic fairy tales. See, I was reading Kelsey Bryant's Suit and Suitability, and remembered that I'd always wanted to retell Jane Austen's novels. With fairy tales. And my brain went into hyperdrive picking out fairy tales to go with the novels. For each, I wanted a fairy tale that had similar themes, characters, or plots. I had to ask around on a few of them, but I think I've come up with a pretty good line up. Shall we proceed? (I have organized these in the order that the original novels were published, as that's the order that I also plan to publish these. Just as an aside.)

Worldbuilding for this world has been interesting, as it includes elemental magic (an addiction of mine), and a number of mystical creatures.

(I also distracted myself by making gorgeous mock covers for all six books. Call it graphic art practice...)

First off, we have Rose Petals and Snowflakes, aka Sense and Sensibility. This one is, perhaps, the most immediate and intuitive of my selections, and one of only two that I haven't had anyone question. S&S is a tale of sisters, so, of course, I went for a fairy tale that focused on a pair of sisters - Snow White and Rose Red.

So I'm combining Elinor with Rose Red and Marianne with Snow White. Colonel Brandon gets to be the bear. I am making Einrose and Snowmari princesses, and their father is dying as the book opens. There is an element that I plan to steal from the regular Snow White, and there is some set-up that I'm taking from The Six Swans, so that's been fun. Also creepy, magical forests = life. Am I right?

This one actually has been started and I've made it through a two chapters and 5,000 words. It's been awesome.

Then we have Crown and Cinder, aka, Pride and Prejudice. This is one I thought was intuitive, but I've had a couple people squint at me and go "I don't see it - this should be Beauty and the Beast." But, I don't really feel B&B from P&P. This is a story about class distinction, falling in love at balls, and dysfunctional families ... and, to me, there is no fairy tale that supports that story line as much as Cinderella.

Of course, this is more of a "Pride and Prejudice completely derails Cinderella" retelling, featuring a Lizzy as a fire-wielding cinder in a country where cinders are not well-trusted. Janet and Lavina are the stepsisters, and I've moved the other two Bennet sisters to "friend" status. (And, possibly, combined them with other characters.)

This one has also been started, but I so far only have the introduction. But it includes an awesome twist on P&P's opening line and I love it.

Then we have Emmazel, long for Emma. This one is probably the least intuitive, and I actually had a girl tell me that it was the most impossible choice I could have made. But, hear me out. What are the biggest obstacles to Emma's happiness? Her pride, of course ... but also, her father. Now, don't get me wrong, he's one of my favorite characters in the book, and she loves him dearly, but the fact remains that he has tied her to himself and she would sacrifice her own happiness to ensure his. And so, and maybe it was because I had the fairy tale on my brain thanks to the Arista challenge, but I went with Rapunzel.

Emma, of course, will be combined with the titular character, and her father will be a hypochondriac wizard who puts her in the tower to keep her safe from the world. Mrs. Bates will be a herbalist that lives nearby and who the Wizard hires to train Emma with her plant magic. Isabella, Anne, and Harriet will be a series of companions that the Wizard had procured to take care of her and keep her company ... and who Emma processes to marry off to the princes who are trying to rescue her. (Emma has a small obsession with love potions, much to her father's annoyance). Jury's out as to how Emma came to be the Wizard's daughter, but we'll cross that bridge when we get there.

And Knightly ... is a black cat named Knight. Inspired by Salaam from Sabrina the Teenage Witch. Yes, there will snark. Loooooots of snark.

And now we get into the Austen novels that I ... haven't actually read. *glances about nervously.* Now, I promise that I WILL read them before I retell them, and I am acquainted with their plots thanks to reviews, wiki's, etc. But, this is why I had to do asking around for some of the novels.

However. I did come up with Winter Palace on my own. WP is a retelling of Mansfield Park, and I admit that this is the retelling that I'm least sure about, but everyone who has read both the book and my chosen fairy tale seems to like it. As I understand it, MP is the story of a girl who's in love with a close childhood friend (cough, her cousin). But he doesn't really see her that way, and falls for someone else instead - and the book's about how she keeps him out of the girl's clutches. Now, that might be an over-simplification, but it was enough for me to choose The Snow Queen to match it.

Since I've not read the book yet, I can't tell you how things are going to line up and go down, but it's going to be exciting.

And then we have the one for Northanger Abby, that took me the loooooongest to pin down, and I actually have Kelsey Bryant herself to thank for the suggestion. Creepy gothic mansions, a heroine who loves to read - what fairy tale could be more perfect than Beauty and the Beast.

Except ... I actually have a second fairy tale planned for this one as well, as a plot twist. It also features roses as a motif, but that's all I'm going to say about it. (Roses are a common motif in fairy tales.)

This is the Austen novel that I know the least about (though I have read its wiki summary), so, again, I can't really tell you how things are going to line-up and go down, but let's just say ... it's going to be a roller coaster. And I might have a sword-wielding Charis. I know she doesn't have any personal magic, but Pinterest is trying to sell me on her having a sword. And her not liking the fact that she has a sword. mwahahahaha.

Then, finally, we have Prevailing Winds which is a retelling of Persuasion. I've actually started reading Persuasion, a couple years ago, but I'd only made it a couple of chapters before review books took precedence, and I never got back into it. *sigh* But I actually have Jenelle Leanne Schmidt to thank for this book's fairy tale. I had been considering Snow White, thanks to a post someone had done in the Rooglewood group, but I wasn't sold on it, due to already having two other snow-themed books in the collection, one of them Snow White and Rose Red. And so when Jenelle suggested Little Mermaid, I was immediately sold.

After all, they're both about a forbidden romance.

Now, the plan is for PW is to be more of a sequel to LM than anything else - with the twist being that, instead of trading her fins for legs, she realized that it wasn't worth it, and gave him up instead. And now it's been a few years and her underwater kingdom's in trouble and she has to go to land to save it. Or something, hazy on the details. I just know that she's going to go to land as a human, reunite with her former lover, and he's not going to recognize her 'cause it's been a few years and he's used to her with fins.

It's gonna be awesome.

But, yes, that's the line-up. Which of these is your favorites? Any that you just don't get? Feel free to check out the gorgeous pinterest Board that I have for the series.