Have I told you guys of my (slight) obsession with fairies? Someday, I'm going to write a book about them - more than what's already in Bookania - and it's going to be awesome. I have a fairyworld built, with lots of fairies created to inhabit it (and I do mean a lot ... I also have a lot of pictures drawn for them, because I fancied myself an artist at the time. Some of them ain't bad) 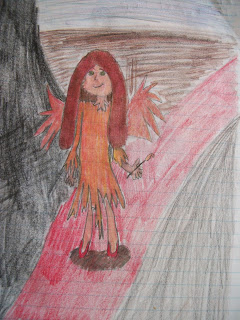 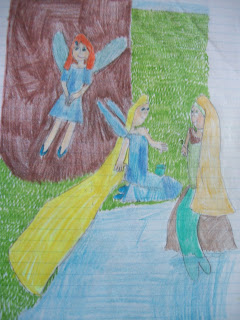 Why am I going on about fairies, and sharing my old artwork ... well, because I'm participating in a cover reveal today, and the author didn't provide me with an image besides the official cover art, and you guys know me and my stinginess with cover arts.

So first off, the author - Claire Banschbach


Author Bio
Claire Banschbach was born and raised in Midland, TX, the fourth of eight children. She was homeschooled through high school and is now a proud member of the Texas A&M University class of 2014. She is currently working on her Doctorate of Physical Therapy at Texas Tech University Health Science Center. She continues to write in her spare time (and often when she doesn’t have spare time). She hopes her strong foundation in God will help to guide her writing.

Synopsis
A witch and her master capture a young faery and command her to kill their enemy. Adela has no choice but to obey. If she does not, they will force the location of her people’s mountain home from her and kill her. To make matters even worse, the person she is to kill is only a man struggling to save his dying land and mend a broken heart.
Count Stefan is a man simply trying to forget the woman he loves and save a land crippled by drought. When a mysterious woman arrives at his castle claiming to be a seamstress, he knows she is more than she seems.
Adela enlists the help of Damian, another faery, to try and delay the inevitable. He insists she has a choice. But with the witch controlling her every move, does she?

I have the privilege of reviewing this book. I've only read a little bit of it so far, but what I've seen of the worldbuilding is awesome, and I can't wait to get back into the book to finish it!

And now the cover. 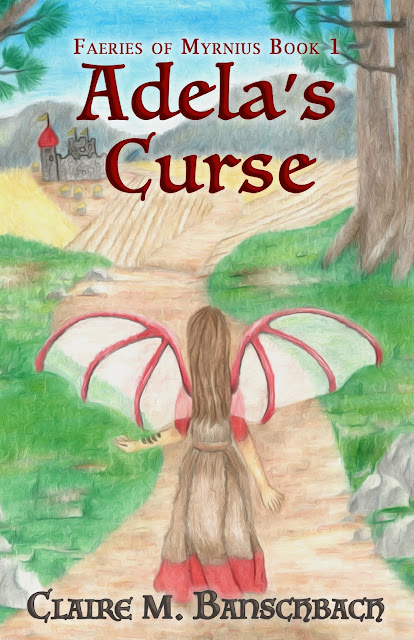 And shall we all agree that this artist is much better than I am?
Knitted by Kendra E. Ardnek at 10:27 AM 2 comments: 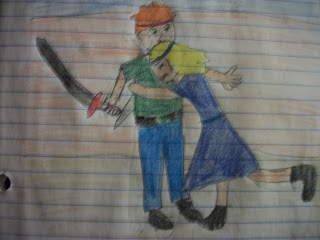 Okay, note to self: Stop falling off the edge of the earth. I think it's been a full month since I last posted??? Not good. I have been hard at work on LDTD, though. Working through chapter four of part five, so that's good, yes?

So today, in honor of Valentine's Day, I'm going to share my favorite couples in my writing. I'm not going to list them in any particular order, because they can be mean to me if I try to play favorites, and I'm not sure that I'll limit myself to ten ... we'll see how it goes.

Robin and Eric - The Bookania Quests

Everyone's favorite rivals turned lovers. Eric is amazing (seriously, I need an Eric), and Robin is ... Robin. They were not my original plan for the book (I mean, he was already safely engaged, and she ... she supposed to be a side character. But then she took over the book and stole the hero, and I've never looked back. She's a fun character to write. So's he. Their banter is fun to write.

Clara and Andrew - The Rizkaland Legends

Speaking of rivals ... well, Clara and Andrew weren't exactly rivals. They just got stuck together in what was practically an arranged marriage, and ... yeah. She didn't react well. But when she does finally own up to the fact that he's actually a great guy, and maybe it's not the end of the world to like him ... well, they're such an awesome team. I can't wait to get back to them for book 3.

Samson and Madeleine - The Bookania Quests

And now for an actual arranged marriage. Samson and Madeleine were betrothed since childhood, and when his castle was attacted, he and his twin sister (who was betrothed to her twin bother), came to live at her castle. So they have an almost-sibling relationship, and have by this point completely accepted the fact that they will someday marry each other. Even when they are given the option of breaking it off ... they only ever consider it in jest.

Reuben and Petra - The Rizkaland Legends

Petra is among of my first characters. Reuben was an afterthought. I'm not sure how I thought I could pull off her character without him, because they are now inseperable. They grew up together as best friends. He's wanted to marry her since they were five and seven. She's practial and pragmatic. He's fun and humorous. They're such a fun pair, and such a perfect balance for each other ... not that they don't have their issues.

The fact that they have telepathic powers is awesome, too.

To be honest, I've not really been able to work with this pair as a couple yet, but I do know that they're going to be adorable. For him, it's kinda love-at-first-sight, though she's much more reluctant. (She's been dodging marriage proposals for seven or eight years now. She's grown suspicious of any man.) I can't wait to let you guys read about them.

I have a ... slight addiction to ... throwing a wrench in a budding relationship, and suddenly there being a 20 ... 50 ... 100 year gap between the pair. But WAIT! He has a son/grandson/great-grandson just the perfect age for her! Shira and Arthur are exibit A.

I'm afraid their names border into spoiler territory. But I love these two ... and honestly wish their story was happier.

AXE and Melthorn - Lessons with the Author

This is the top secret series that I started writing three NaNos ago, but still haven't finished the first book yet. AXE and Melthorn are so far the only official ship, and it's only confirmed for the first book so far. But they're fun. She's a bit of a rebel, he's a bit like Andrew in that he lost a parent at a young age and has had to fill in. They're cute.

Ian and Fiona - HaV Academy

He's an ice-powered villain, she's a pyrokinetic hero. They say opposites attract, right? I'm not sure whether or helps or hurts their relationship that they're required to fight publicly at least once a month.

Obsidia and Delany - Worth of a King

Okay, so his dad killed hers. Minor wrench in their relationship  - after all, it's not an uncommon situation for Dialcian princesses. What is a wrench is the fact that she has a twin brother who could make Delany's father's claim to the throne illegal.

When you've been married 6,000 years, your relationship has been through some difficult times, and you've probably emerged much stronger for it. Amber might be the villain of the Rizkaland Legends, but her marriage to Granite is one of the most beautiful relationships that I've written. Of course, it hasn't been the happiest of marriages for the last 3,000 years ... but ... ya know ... she is the villain.

I'm going to go ahead and admit that they are a couple. They grew up together, he's always been protective of her. I've stated before that marriages in this world are always arranged by the twins of the two ... and basically, Melisza's life is in danger at one point, and the only way Jaqob and his sister Tabetha can see to save her is for Jaqob to claim her. Alistaar, Melisza's twin isn't happy about the affair ... but at that point, he's not in a position of any power, at all ... so there isn't really anything he can do about it. Sorry if that's vague ... but spoilers? Still, he's so protective of her, it's so sweet.

AKA Puss in Boots and the White Cat. They're adorable. I've been wanting to write a romance between those two fairy tale character since I saw the Sleeping Beauty ballet, but since Push had gone and declared another fairy tale his love interest (and I'm THOROUGHLY looking forward to that one), it didn't work into the official Bookania series. But I have them in Poison Kiss, and it's awesome.

Doranna and Casperl - The Bookania Quests

She's nearly a hundred years older than him, and watched him grow up ... but she also spent a hundred years frozen at the age of sixteen on the top of a mountain. It works out. He's so head-over-heels for her, and completely astonished that he, a mere woodcutter, could do what no prince could ... it's adorable.

And there are more of course ... but I think I should stop there, yes?
Knitted by Kendra E. Ardnek at 8:35 AM 4 comments: