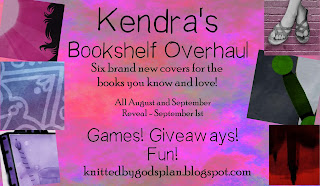 Well, I did it. Somehow, in these last three months, I managed to overhaul and rerelease all six of my novels. I also released Poison Kiss. No, I don't know how I did it. It got intense, especially the last three weeks.

But now it's done, and look at these shiny new covers.

Oh, but I can just stare at those gorgeous covers all day long.

You're probably expecting me to announce the winner of the lovely package of books now ... but I've actually decided to give you guys a tiny bit more time. See, I'm still waiting for my last package of proof copies to come in for Kingdom, WPFP, and LDTD, and thus I haven't ordered the box of books for the winner.

And I realized that none of you have had a chance to read Kingdom's revision yet - unless you're ninja readers - so I'm extending giveaway entries through to November 15th.

I'm going to go frantically write The Worth of a King. C'est la Vie.
Knitted by Kendra E. Ardnek at 6:00 AM 5 comments:

Game: By Any Other Name 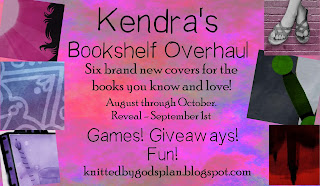 All right, first off - both LDTD and WPFP are free today through Saturday. Please share with your friends - in fact, if you tag me in your share, I will count it as a point to the giveaway. And there's no limit on how many times you can share it and earn points, so blast away!

And, don't forget, Sew is on permafree, so sharing it will give you points, too, if you tag me in the share.

All right - and now for the game. Basically, I'd like, in the comments, for you to post one of two things -

(a) A new title for one of my books. It has to fit the book, but it's up to you as to how well, or how seriously.
(b) A blurb for a new story based on one of my titles. It can be as wildly different from the book itself as you'd like. In fact, the more different, the better.

You may post as many blurbs/titles as you'd like/can come up with.
Titles are worth two points, blurbs are worth three. An extra point for any that makes me laugh. Another extra point if I fall out of my chair laughing.
Titles are for my published books and short stories only, but blurbs are open to my full WIP list.
Have fun!

Hello! I have another game for you guys, based off of something I did in the Facebook party the other week.

Basically - most of you guys know my Pinterest Boards, right? 'Course you do. So here's the deal - I post a lot of very interesting and vague things on my storyboards, and today's your chance to read over them an ask questions. To play, all you have to do is post a link to one of my pins in the comments, and then I'll reply to your comment with an explanation for the pin. I miiiight even give you a straight answer. You MAY be able to earn some spoilers.

Be aware that some of my pins don't actually have straight answers. They're there just because I feel like having them.

So, some quick rules -

Each pin must be a separate comment. Include the title of the storyboard you gleaned the pin from when you post, and if you have a specific question, do ask. Otherwise, mine will just be a general explanation.
You're welcome to ask about as many pins as you'd like, but only three at a time. (And by "at a time" I mean, "as I answer them." Basically, I don't want to be deluged with three hundred pins to answer questions about at once.)
You must get your pins from the storyboards I'm embedding below ... but that is all of my storyboards. I'm just making them easier to access. The only one I left off is Poison Kiss, as I have published that book, and there aren't any pins there that aren't answered in the story. There shouldn't be, anyways. I did post The Ankulen, as there are pins there for the spin-off series.
Each pin you post in the comments is worth one point towards the giveaway.

Oh, and before I let you loose in the comments - just a quick update on the Q&A - I've realized that I don't have time to get the posts written up at the very moment, so I'll be doing them in December. Thus, I'm opening the questioning back up. Get thyselves over to Goodreads. I especially need more questions for the Bookanians.

Beautiful Books time again! I'm taking part in Cait and Skye's Beautiful People link-up to talk about my NaNo of the year - The Worth of a King.


1. What inspired the idea for your novel, and how long have you had the idea?

So the inspiration for The Worth of a King was a conversation with Miss Jack Lewis Baillot in her blog comments where she admitted that she couldn't write girls, and I said I couldn't write guys, and we promptly decided that we needed to write a book together, me writing the female protagonist and her the fella. And we decided that it needed to be twins because we didn't want to do romance with each other.

I just checked through my emails and the earliest in the chain discussing the book was January 31st, 2013, so it's been on my plate a while.


2. Describe what your novel is about!

It's about a pair of twins caught in a huge political war. Also there are dragons and masked assassins, and awesome worldbuilding.

3. What is your book’s aesthetic? Use words or photos or whatever you like!


Okay, so a lot of dark and mysterious. Lots of crowns. Dragons. Awesomeness.

4. Introduce us to each of your characters!

Let's start with the POV characters:

Obsidia: Princess of Dialcia. She's engaged to Prince Delaney ... the son of the man who killed her father on the day of her birth. The man who is the current king because her father had no (apparent) male heir. She's the quiet sort, preferring books to people and history to politics. She doesn't like change.

Adrian: Raised the son of a printer in a small town, expected to take over for his "father" one day and live out a simple life ... but then he's informed that he's actually the twin brother of Princess Obsidia and that he has to go reclaim his throne and avenge his murdered father. Like his sister, he's a quiet bookworm who hates politics and change.

Delaney: Obsidia's intended husband and the official crown prince of Dialcia. He knows that his father's up to no good, and he's actually delighted to find out about Adrian because it means that he doesn't have to wait until his father dies to get him off the throne.

And for other major characters:

Nadilynn: Delaney's younger sister and Obsidia's best friend. She's a ray of sunshine too precious for this world.
Jerolin: Adrian's foster brother. As grumpy as Nadilynn is cheerful.
Christa: Adrian's best friend and potential love interest. Also a baker's daughter. She's a practical girl.
King Ossian: Delaney's father, who was formerly the Diplomat to Morcondia, the Dragon country ... until the dragons corrupted him and convinced him to kill King Edson.
Queen Adelaide: Obsidia and Adrian's mother, a woman who has become very bitter after her husband's murder.
Zara: Princess of Zovordia, a nation of former assassins who now follow El Shaddai but still wear masks and act all mysterious. They're in perpetual war with Morcondia.
Queen Amber: While some of you might recognize her as the Lady Dragon of the Rizkaland Legend, this book takes place before she turned evil.
King Granite: Amber's husband, before he got all sad and mopey like you see him in Rizkaland. Yeah, I know. It's so awesome.

5. How do you prepare to write? (Outline, research, stocking up on chocolate, howling, etc.?)

Howling. I like that one. We'll go with that.

6. What are you most looking forward to about this novel?

All the adorableness. And the intense political situations. And it just generally being awesome.

1 - The world this book is set in is an inverted sphere. This means that people walk around on the inside rim of the ball, rather than the outside, like we do.
2 - The world is lit by a collection of stars at the sphere's center. During the day, they draw together and shine brighter. At night, they spread out and dim. Gravity in the world fluctuates with the brightness. Also, the stars occasionally fall and they are capable of magical feats. Amber generally collects them before anyone else can use them.
3 - I think I mentioned dragons ... but did I also say that there are Winged Horses????

8. What’s your character’s goal and who (or what) stands in the way?

Adrian and Obsidia both want nice, normal lives with as little change as possible ... but mwahahaha, I'm writing this book, and I'm going to throw sooooo many curveballs. Like, um, Adrian finding out that he's actually the prince, and Obsidia finding out that King Ossian will probably kill her just as soon as she marries his son.
Delaney wants to get his father off of the throne and Obsidia kept safe but ... Dragons.

9. How does your protagonist change by the end of the novel?

Adrian and Obsidia both grow a lot, muchly in the confidence department. Not so much sure about Delaney, since I only just added his POV to the story, but he's probably going to do some growing too. Doncha worry.

10. What are your book’s themes? How do you want readers to feel when the story is over?

Family, friendship, courage, determination, faith, trust in God, the normal gambit for my epics. And I want my readers to be disappointed that it's over when it finishes. ESPECIALLY SINCE I AIN'T WRITING IT A SEQUEL. I AIN'T. I AIN'T. (Well, except for Dragon Song, but it's not a direct sequel.)
Knitted by Kendra E. Ardnek at 7:00 AM 11 comments:

Canons of the Head!

I've got another game for you guys today.

Basically, in the comments below, post your headcanons for my books - any of them that I have published, even the short stories.

Put each headcanon in a distinct comment. Feel free to comment on other people's headcanons and build upon them.

Each headcanon is three points.
Knitted by Kendra E. Ardnek at 11:04 AM 15 comments: