The Mothers in my Writing 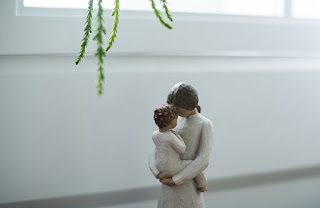 Happy mother's day! Everyone, do me a favor and go give your mother a huge hug for me. Kay? Kay. And your Grandmothers, too, if you can manage it. I lost my Grandmother on mother's day, nine years ago.

But, sad stuff aside, let's talk about fictional mothers. Particularly the mother's in my own writing. (I'll feature the mothers in my favorite books by other people next year, kay?) It seems to be a trend in fiction, especially in fantasy, to kill off the mothers, but I like to rebel against that. Mothers are awesome people, see. And the good ones know to let their children go off and adventure. I've killed off a few, but, for the most part, they're all alive and kicking.

So, yeah, let's get started. In no particular order and with no number cap.

Isa: Let's start off with Clara's mom in Water Princess, Fire Prince. You only see her in one scene at the end of the book, but she's such a core part of Clara's character that I can't help but mention her (especially as she plays a much larger role in Love and Memory. I need to finish writing that.). She's a woman who wanted a large family, but due to an accident in her teens, ends up with only Clara - and ten miscarriages. She's a woman based on my mother and paternal grandmother, and, oh, she hurts my heart so much.

Maid Marian: Let's hop over to Bookania now to talk about this lovely lady. While she is a mother in her own right, where she shines is in her mentor relationship with Robin. See, she does see Robin as her daughter (for spoiler reasons). And Robin very much benefits from a positive relationship with an older woman.

Andrew: Wait, what? A guy? Why am I putting a guy on a list of mothers??? Okay, hush. I'm just saying that this fellow deserves an honorable mention for stepping up after he lost his mother in a car accident (see, I DO have a few maternal casualties), and was mom to his three younger brothers. At twelve. Poor boy.

Petra: Oh, you guys haven't really read her as a mother, but let me just say, the mother-daughter relationship that develops between her and Laura is beautiful. And she does have children of her own, and she's a wonderful mother to them, too.

Robin: Again, you guys haven't read her as a mother yet but readers of the revised Do You Take This Quest? know that she has adopted a whole orphanage of children (her new husband ran the place), and readers of My Kingdom for a Quest know that their own is on the way. And, let me just say, motherhood looks very good on Robin. Really mellows her out and gives her a direction in life.

Erika: Aka, the Eternal Queen. I haven't finished writing this book - I've barely started writing it, but her relationship with her granddaughter has been fun thus far, especially since she's physically younger than her granddaughter (due to the cyclical nature of her life). And I'm very much looking forward to writing the resolution of her relationship with her own mother.

Rintaya: This is a woman whose baseline of her personality is "mother." She's Ashna's stepmother in Lady Dragon, Tela Du, and Ashna really scores with her stepmother. A very kind, understanding woman ... who may or may not be hiding some pretty interesting secrets.

Emily: Aka, Jen's mom in The Ankulen. I don't know if I've ever mentioned her by name before. But she's a dear lady, who, like Isa, wanted a large family but only ended up with just one daughter. She chose the route of adoption, though that ... turned out interesting. Oh, but her backstory's sad.

Queen Blanche: Stardrana's mother in Half-Hidden, and another character for whom "mother" is the baseline of her personality. She would sacrifice anything for her children - and has. Ah, but her story's so tragic, and I really can't wait to share it with all of you.

Queen Tailya: One of Jen's imaginary friends in The Ankulen - to whom was given children before a husband. Yeah ... kid logic isn't always the soundest.

Queen Camilla: Eric's mother in Bookania. She was never the prettiest of women, and her husband is ... shallow. So, once she'd provided him with his heir and spare, was pretty much left alone. Pretty much the source of most of the good parts of Eric's character. Such a dear woman.

And ... there's my list. There are some others that I have in my WIP's who I didn't mention, including several who are negative influences (Queen Charlotte, Queen Adelaide), but I'm going to stop here. This is a good list.
Knitted by Kendra E. Ardnek at 7:00 AM