I can't believe we're already down to the last two of my precious Golden Braids.

Never allow a stranger to buy you anything. Never reveal what you truly are. Above all, never, ever allow your hair to be cut.

In a plague-ravaged world, people will stop at nothing to find a cure. Rebekah is a young norn who on the run for her life. Charles, a man desperate to heal his ailing wife, wants the life-giving magic contained in Rebekah's hair.

When Rebekah’s path crosses with Martha’s, a mother who has lost her daughter to the same man, secrets will be revealed. Buried fears will be resurrected, and the conflict between norns and humans may cause devastating havoc. Will Rebekah and Martha find a way to help both human and nornkind, or will Rebekah’s pursuer capture her? Will the plague be eradicated, or is a more sinister plan at work?

Things are not how they appear in this story of finding a place to belong. Rebekah’s Refuge is a tale of sacrifice, love and courage. You will meet many individuals, human and norn alike, who bear scars, scars that cannot be seen. A tenuous thread binds their destinies together, but threads, like hair, can easily be cut. Only those who listen can find the courage to fight. Rebekah’s Refuge is a tale of desperation and hope, a story of turmoil and healing.

Let's get into those reasons, shall we?

1. Meredith is the master of retelling a fairy tale in a way that is very definitely a retelling of said fairy tale, but at the same time, completely on its head and its own story. I wouldn't even call it a "twisted" tale. It's a story that's been dumped into a bag, and shaken out to form its own story. And while some retellings lose large pieces of itself when they do this, Meredith somehow manages to retain MOST of the story.

2. It's a tale of family. It's a sacrifice that a mother makes for a daughter, a daughter for her mother, a husband for his wife. And while not all decisions are the best, they're all sympathetic (or at least pitiable), because you can feel the motivation.

3. It's an #OwnVoices story. Rebekah, the titular heroine of the story is blind - and so is Meredith herself. And it was beautiful.

4. The setting is so unique. While clearly set in the same world as her previous book The Princess and the Invisible Apple Tree, it's no longer a medieval fantasy. Instead, we're in a town on the edge of the wild west, and you don't see that nearly enough in fantasy. And I loved the Norns. They were so fascinating!

5. The power of faith. One thing that can be said of Meredith is that she doesn't shy away from the power of her faith. It's absolutely beautiful. 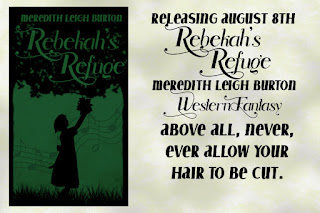 Meredith Leigh Burton is a voracious devourer of fairy tales. She is a motivational speaker, teacher and writer. She attended the Tennessee School for the Blind and Middle Tennessee State University, where she received a degree in English and theater. Meredith hopes to convey through her writing that people with differences can contribute much to the world. "Snow White" has always been her favorite fairy tale. Meredith has written another fairy tale based on "Snow White" entitled Hart Spring, which can be found in her anthology, Blind Beauty and Other Tales of Redemption. She resides in Lynchburg, Tennessee.
Find her online at:  Goodreads || Amazon

Don't forget to check out the rest of the tour and the giveaway here!
Knitted by Kendra E. Ardnek at 1:39 PM