Can you save someone who doesn’t know if she’s alive?
Breen lives locked away, separated from the world by the walls of her clock tower and the machine of gems, gears, and magic that replaces her heart. That is, until an unexpected visitor appears in her tower, offering a dangerous gift: freedom. His promises awaken hope for a life unbound by the tower walls — but she knows that if he learns about her heart, it’s only a matter of time before he turns on her.
Josiah is powerless. Though he’s the crown prince of the mighty Chanian empire, he feels stifled by his inability to protect his people from the schemes of corrupt nobles. When he discovers a girl trapped in a locked clock tower, he thinks he’s finally found a problem he can solve . . . but more than just walls keep her captive.
From the royal palace to the streets of Rivenford to the tops of clock towers, secrets hide around every corner in this steampunk retelling of Rapunzel. Breen and Josiah hold the keys to each other's struggles — if they can break down the barriers that divide them.

Sarah's amazing Steampunk retelling of Rapunzel released today, and I'm here to tell you exactly why you need to stick your nose into it right now.

1. It's steampunk Rapunzel. AKA, instead of just ANY tower for our poor heroine, it's a clock tower. With gears. And alchemy. BLOOD ALCHEMY. I loved all of the inventions and everything.

2. Political Intrigue. I love a good political intrigue, where battles are played in the courtroom, and not the field, and this was so amazing. Watching Josiah worry through the moral dilemma that blood alchemy presented, and then do everything in his power, and then some, to do what is right was amazing.

3. Disability Rep! I am seriously proud of my Braids authors in this department. This book stars a deaf Rapunzel. Seems that staying in a clocktower for extended periods has a tendency to destroy your hearing. ALSO, Josiah's sister is deaf as well. So it's just awesome, pure awesome.

4. Sarah's just an amazing writer. This was the book that I had to give the least amount of feedback on, and that's just 'cause it's that amazing of a story.

5. A focus on family and friendship. While I totally ship Breen and Josiah for the future, these characters aren't getting distracted by butterflies and kisses. And while I do love a good romance, they can be distracting, so it's nice to see them left out from time to time.

And there we go. Read this book now - and it's already available in paperback, fwi, if you want to pick that up, too. 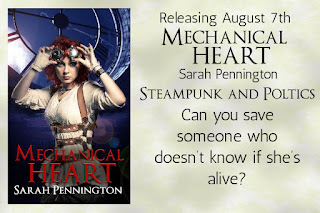 Author Bio:
Sarah Pennington has been writing stories since before she actually knew how to write, and she has no intention of stopping anytime soon. She is perpetually in the middle of writing at least one or two novels, most of which are in the fantasy and fairy tale retelling genres. Sarah's first published work, Blood in the Snow, received a perfect score and Special Unicorn status in Rooglewood Press's Five Poisoned Apples contest. When she isn't writing, she enjoys knitting, photography, and trying to conquer her massive to-be-read list.
Find her online at: Website || Blog || Second Blog || Goodreads || Facebook || Amazon


Check out the rest of the tour + the Giveaway here!
Knitted by Kendra E. Ardnek at 11:01 PM