Greetings and salutations! I'm here today to help celebrate the release of Morgan Huneke's newest book, Espionage, a companion story to her Time Captives Trilogy. Tomorrow I'll be reviewing it over on the O.Scarlett blog, but today I get to interview the main character, Miss Savannah, or Vannie as her friends call her. 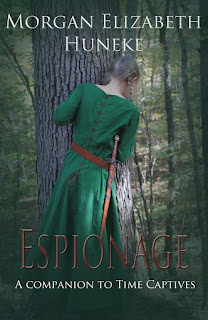 “Sir Roland has invited us to visit for the Autumn Feast.”

“Do we have to go, Papa? I couldn’t feast with the most crooked politician in all of Briznom.”

As the daughter of a Briznomian vassal lord, Vannie Cumberland has spent her childhood immersed in the world of politics. Relations between Briznom and the neighboring country of Calhortz are strained due to the tyrannical rule of the strytes. A proposed alliance could calm relations between the two countries, but would come at the cost of Briznom’s freedom.

When her father’s political archenemy invites them to the Autumn Feast, Vannie uncovers an evil scheme endangering the life of someone close to her. Personal enmity comes to a dangerous head as Vannie struggles to expose the corruption and stop the alliance. Time is running out.

Events are becoming too big for her to handle. Will Sir Roland’s son help or will things finally spiral out of control?

1. Hello, and welcome to my blog, Miss Savannah (or can I just call you Vannie...). Can you tell me a bit about yourself?
Yes, you can call me Vannie. I mostly just don’t want people I don’t like calling me Vannie. I’m Vannie Cumberland, the oldest daughter of the best vassal lord at Court, the oldest of three girls and I just turned nine. I like to read and knit, but I also like things like hunting and riding. I like archery, and I got my own bow for my birthday. My papa takes me with him to Court a lot, so I get to see politics in action all the time. I understand politics a lot better than some vassal lords I could mention.

2. You're the oldest child of three. As an eldest of four myself, I can relate. What would you say are the pros and cons of your position?
Well, the good thing is that I’m the one who gets to go with Papa most often. And I kinda like having my sisters look up to me. But since I’m the oldest, I’m the one who had to get betrothed as an infant. *wrinkles her nose* Kate and Mandie escaped that. I’m too young to have to bother about who I’m going to marry when I grow up, but because of that awful tradition I have to. And since that person is Kermit… *sticks out her tongue* I’m determined to find a way not to have to marry him. I don’t like how I seem to have more responsibility than Kate and Mandie, but I have more privileges too, so I guess it makes up for it.

3. You're also the daughter of a Vassal Lord. Could you tell my readers what that means?
It means I have to marry Kermit. *makes another face* My papa is a member of Court, which means he helps to make the laws for Briznom. There are twelve vassal lords total, and they all have their own vassalage they’re in charge of. They come together during the session to pass laws for the whole country, and then King James either signs them into law or vetoes them. The vassal lords conduct trials too. The title of vassal lord goes from father to son, but when a family just has girls, like mine, it goes to the husband of the oldest daughter instead. They have to make sure there’s going to be a husband of the oldest daughter, so we’re betrothed as infants. The oldest sons of vassal lords have to get betrothed as children too, though, so as long as you’re firstborn, you can’t escape. It’s probably because if the vassal lord dies before the heir is of age, the father of the betrothed fills the role until the heir can take over.

4. Your story revolves around a trip you take to your father's greatest rival. Are you excited about that? Why or why not?
Ha. I’d never be excited about visiting Sir Roland. I wanted to get snowed in, but we never get snow before January. See, Papa and Sir Roland are always on the opposite sides of every issue, and Sir Roland’s never nice about it. He’s not even a good guy. He isn’t a Christian or a conservative, and he’ll do whatever he can to get his way even if it’s not right. Of course I don’t want to go visit him for the Autumn Feast. His son seems strangely nice, though. He’s basically the opposite of his father.

5. Who would you say is your best friend?
Probably my middle sister Kate. Mandie’s too little to be any more than a baby sister right now, and I’ll never consider Kermit a friend. I only just met Kyle Roland, so I don’t know if he’ll be my friend, and I don’t know any other children, really. So it would be Kate. We haven’t always gotten along perfectly, but we’re good friends now. 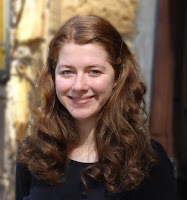 Morgan Elizabeth Huneke is a homeschool graduate who lives in Georgia. She has enjoyed creating characters and writing stories since early childhood. Books have always been a big part of her life, never more so than when working at the local library. Her other interests include reading, playing the piano and violin, and politics.

a Rafflecopter giveaway
Knitted by Kendra E. Ardnek at 7:33 AM