Characters In Costume - Fiona and Pearis

This month's theme is obstacle characters. Characters who aren't necessary villains, but they get in the way of the main character's goals and dreams. Sometimes their conflicting aspiration is just as worthy as the MC's but since the two goals come into conflict, there's a bit of friction. Or a lot of friction.

When Mrs. Adams issued this challenge, I was stumped. I couldn't think of a single obstacle character other than Derek ... and while her own character is a boy, I really cannot pull off a boyish look. Maybe if it was just my face ... but that would defeat the "Costume" part.

So I thunk, and I thunk, and I thunk ... and low and behold four (female) characters came up to me and demanded that they be the one. And all four were in position to get their way, one being a queen, the second a princess, the third a very high-ranking noblelady, and the fourth a Dizalay (which is something like a queen, but different.)

The Dizalay was a elderly elfla, however, and while I can pull off the old woman look, I didn't feel like dumping an entire thing of baby powder in my hair, and I haven't figured out pointed ears.

I had nearly determined to just do Fiona, since she was the character I associated with that particular dress, but my aunt has a few more dress-up clothes for her girls, a few of which I can still squeeze into with very little restriction on my breathing.

So while Liya the Dizalay was still out of the question, I could now do both Pearis and Lady Roxanne.

And no, this Fiona and Lady Roxanne are in no wise related to the Fiona and Roxanne of HaV Academy. I like to reuse names I like, especially if the character I originally gave it to is not the nicest character I ever wrote. (And no, there is not a Lucy playing obstacle character anywhere. I wouldn't taint that lovely name like that.) 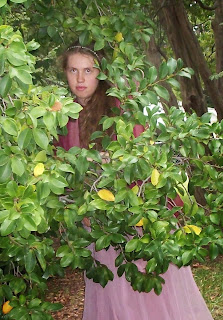 Fiona is the Fairy Queen and the twin sister of Keely, the female main character of my WIP Unforgiven.

Now the fairies do not have a true monarchy, because being queen is not a matter of birth. When the old fairy queen dies, a new one is selected by the counsel. She's usually quite young, because they want her to last a while, thirty to forty moons at least. Her lack of wisdom is compensated by the Leprechaun King who is similarly chosen. The two are supposed to marry, the only marriage that is allowed between the fairies and leprechauns. When he dies, she is now the older and wiser one, and compensates for the inexperience of his successor.

However, Fiona was young even by Fairy Queen standards, and King Eamon, her intended, was a bit old. She overheard a conversation between him and someone where he called her "A very young thing." She, with a temper typical of characters named Fiona, retaliated by calling him an "Old Graybeard" in public ... and it escalated from there. Needless to say, the two did not marry.

Instead, the alliance between Leprechaun and Fairy dissolved, which is not a good thing. 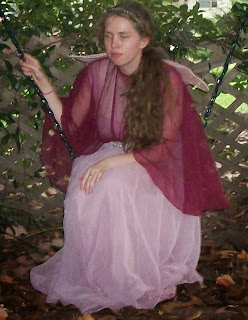 You see, fairies are makers of potions. A few high-ranking ones have wands, but all make potions. Thing is, most of the really important potions require some sort of metallic dust ... which can only be gained by the Leprechauns.

So with the two not talking to each other, there are several potions that cannot be made ... such as the weasel-away potion, which requires gold dust.

Since the tallest of these wee folk is no more than seven inches tall (and he was a giant) weasels are quite a problem for them. Fiona and Keely's own parents were killed by weasels, as was the former queen (who they died defending).

The only two willing and able to hold the two warring peoples together are Keely and Carlin. 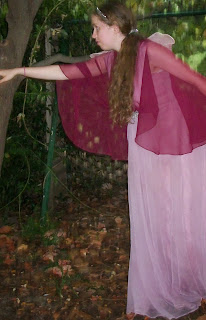 Yes, these fair folk have wings and can fly. Leprechauns travel by rainbow, but that's a topic for another post. 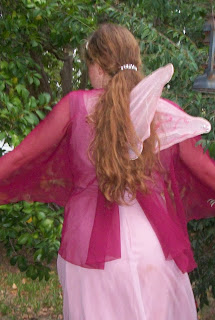 That's the other great thing about dressing up at my cousins' house. They have fairy wings that I can borrow.

I'm really looking forward to writing this story ... but I'm having issues getting it started. 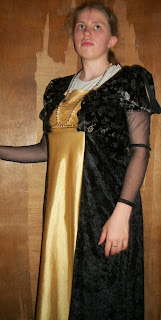 Readers of Do You Take This Quest? have already met Pearis. (Ack! Why do I keep trying to call her Joan? That's her aunt's name!) I'm by no means a perfect representation of her, because her hair is black and mine is that awkward color between blond and brown that neither side wants to claim. (Honestly! If I'm talking to a true brunette, she'll tell me I'm blonde. If I'm talking to a blond, I'm a brunette. very annnoying)

She's the princess of Fronce, which is a very powerful country in Bookania, and an only child. Since she's the sole heir, she's a bit spoiled. Because of her great-great aunt Joan, Fronce is the source of woman's fashion, so anything she wears becomes newest fad.

Such power can go to a girl's head.

(I really don't look like me when my glasses are off.)

She doesn't like Robin for various reasons. First, Robin doesn't act like a proper princess. Second, Robin doesn't emulate her perfect styles. Third, Robin has a better hairdresser than she does.

She doesn't like any of Robin's new 100+ year old friends, either, since they don't bow to her styles, but to the inferior fashion sense of that Joan (who she refuses to believe is her aunt.)

And when one of them "curses" her with gray hair, well she doesn't like that. 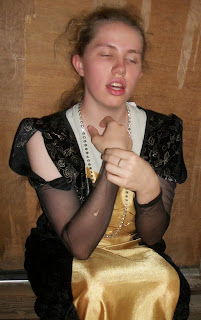 In the opening chapter of My Kingdom for a Quest Leo hints that she liked him, so she is human ... she's just a very spoiled human. And she's going to be very important in the second half of that book. May even have a chapter from her Point of View. She was almost mentioned in Sew, It's a Quest, so she's an older character ... she just hasn't received very much screen-time.

Unfortunately, just as I was about to take pictures of Lady Roxanne ... my camera batteries died ... so ... maybe next time? (I honestly wanted to introduce you to her, since she's a great character. She and Clara just have some clashes of wills)

Oh, and while I was dressed up as Fiona, I decided to pose for the cover of their book. This is actually supposed to be Keely, but they're identical twins, and often dress identically, so it works. This is a working cover that I did up this morning. Like it? 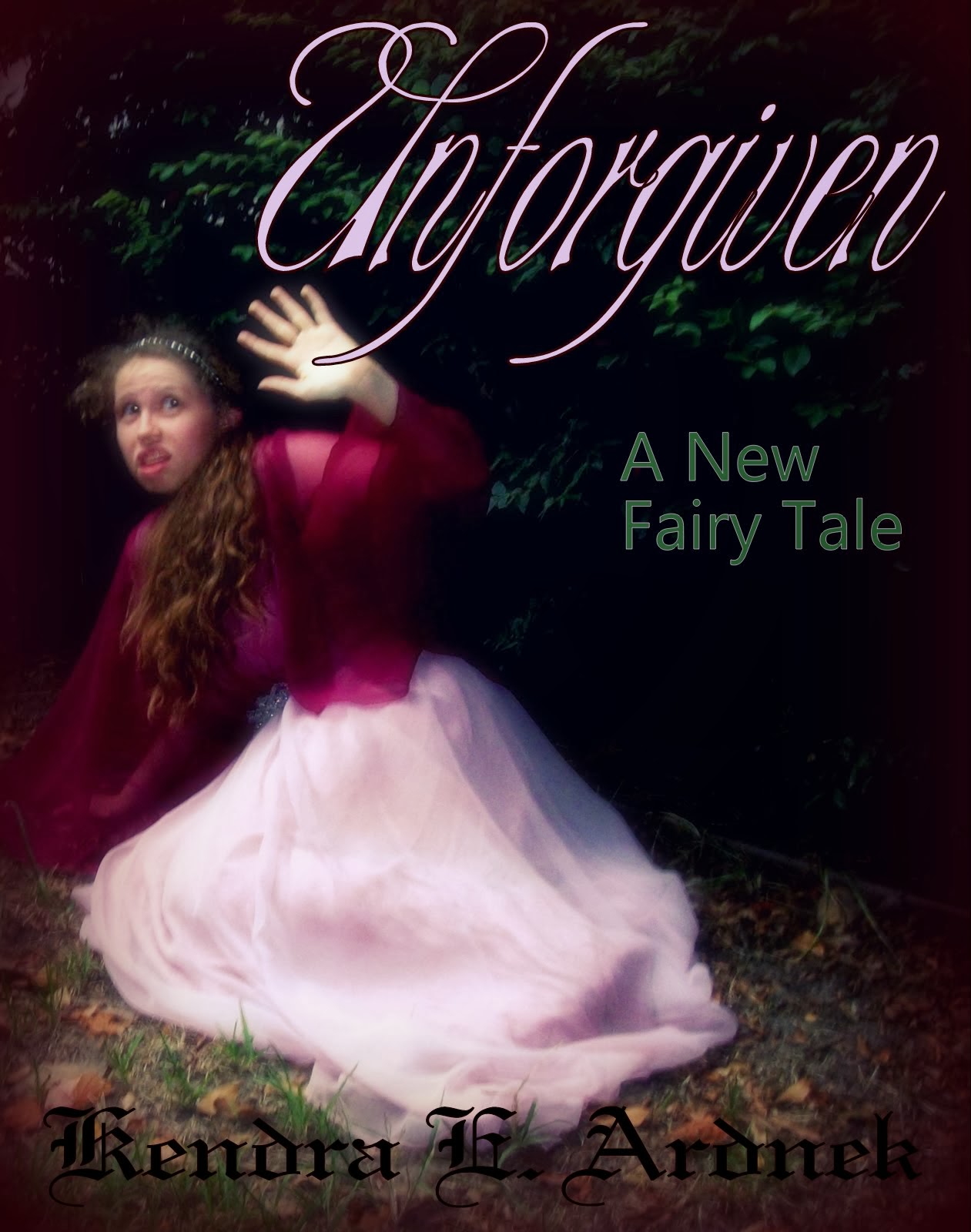 (Twins among fairies and leprechauns are always identical.)

Oh, and I just learned that yesterday was national talk like a pirate ... and I meant to do up another treasure hunt with a PDF of any of my published books (or something like that) as prize ... but I was babysitting, and had no internet, and therefore missed it. Ah, well ... if you want me to, I'll post one on Monday. If I don't get any votes for that, you'll have to wait until next year.