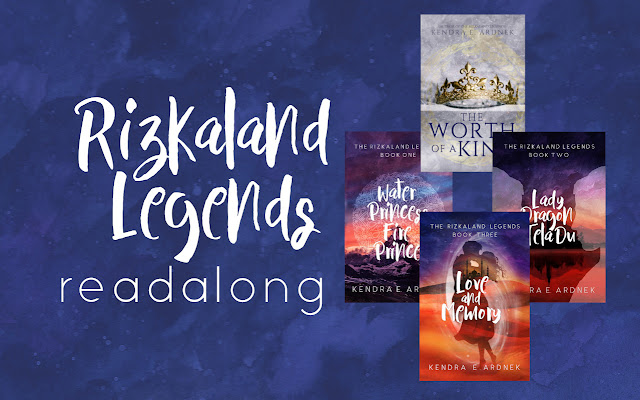 First off, if you missed part 1, you can check it out here.

Second off, if you don't have your own copy of Water Princess, Fire Prince, you can nab it today only free on Kindle!

Third off, there's a giveaway at the end, so do stick around!

Let's get into it.

Summary:
Clara has arrived at the Mountain, and eventually finds Andrew hunting in "her" clearing and challenges him to a duel. He loses until her mask gets knocked off, revealing that she's a girl, and she's not happy that he's her Fire Prince. They then spend a night together rescuing Jasmine and Karlos from a cliff. After a few more days of not knowing what next to do, Andrew has a dream about Alphego, and he and Clara then begin having alternating dreams that gives them riddles and challenges that get them through a system of caves.

Things of note:
Clara and Jill Anna chose to "summon" the Fire Prince with mistletoe muffins, because it's said, if you sleep with one under you pillow, you will meet the person you'll marry over the course of the next day.
There are five challenges. The first and last are puzzles. The second involves finding a lever, and third and fourth involve letting someone take a more dangerous route ahead of the rest of the party. (The first also involves rock climbing).
Clara and Andrew quickly realize that they have ... connections. I.e. - remember Rhoda's cousin that Kath was teasing her about at the start of the book? Yup, that's Andrew. What a weird coinkydink.
His mom was also in the circus with her parents.
It is in this section that we learn about the trauma that shaped both of them as people - her, falling from a trapeze when she was four, giving her an intense fear of falling - and failing - and he reveals a truth about the accident where they lost his mother: They never found her body because she vanished into thin air before the crash even happened. Weird.
Clara and Andrew make an agreement pretty much from the start that they aren't going to rush their relationship, and this section sees them gradually opening up to each other + learning to trust and depend on each other. Clara isn't quite ready to call it love by the end of this section, but ... shippyshipship, anyone?
This is also the part where we find out that Jill Anna likes Jakob. And also that he harbors secret feelings for her as well. Ahhhhh, forbidden love...
Laura makes another appearance in this section. This time she comes from a wedding and mentions a Lucy.
Here we also find out an interesting tidbit about Jill Anna's past - she's a Bug Child. As in, she was given immunity to a poisonous beetle as a kid, and now it's her job to seek out and kill these beetles.
For some weird reason, that I cannot understand, before she lost her mask, Andrew thought that Clara was a giraffe. Why he thought this, even though she was so very short--

(CLARA, GET OUT OF MY NOTES. ANDREW DID NOT THINK YOU WERE A GIRAFFE)

Favorite scenes/other stuff in this part:
Fun fact! The "our adventurers must face a series of challenges before reaching their goal, and each challenge seems tailored to the talents/weaknesses/whathaveyou of one or another adventurer" happens to be one of my favorite fantasy tropes, and I'm honestly kiiiinda sad that this is the closest I've come to it 'cause, with seven adventurers that make it into the Mountain, and only five challenges, I kinda missed some of them? (Mostly I missed Abraham, but ... there was only so much mountain.) Still, this was one of my favorite parts of the book to write.

Clara and Andrew do establish some recurring inside jokes between them, such as "I see" (Which actually gets a revisit in LaM!) and Dihydrogen monixide (which may get a revisit, for though it hasn't happened yet, I do have an entire section of the book left to write.)

I get a lot of people complaining about how Clara initially dislikes Andrew for no reason ... and that's kinda the point? She was so upset by the fact that she was in this fated romance with a guy she'd not met, that she was prepared to find every reason to dislike him from the start. She didn't go into the relationship looking for the positives, she went in looking for the negatives. And Andrew, being the shy, nonconfrontational boi that he is, does the exact thing that disarms her - he steps back and gives her space to figure herself out. And, honestly, given where things end, I think they're in shape to continue a trend of trust and interdependence as the rest of the book goes. 'Twould be a shame if something were to happen to ... derail that.

Andrew's attraction to Clara is a bit more of a "oh, pretty girl, and apparently she's supposed to be mine?" He'd never really given much thought to romance until this point, and so he's mostly just stumbling through just trying to make the most of the situation he's been thrust into. He's attracted to her, but she also scares him. But, from that first night, he gets to see a softer side of her, and, well ... the way to his heart is through the kids that he cares about, and the fact that their first team project was "rescue Jasmine and Karlos" was intentional.

“I think you’re going to wear a groove into the floor,” Andrew observed, the third day they’d been stuck there. He was so tired of watching and hearing her, he was willing to take her snap.
“Maybe that’s the way out,” she informed him, whirling around and leaning against the wall. “Wear a hole in the ground until we fall through. I mean, do you have anything better for me to do?”
“Ah, maybe sit down and give your legs a break,” Andrew suggested. “Wearing grooves has to be a tiring business.”
She shrugged. “I’m bored right now. Moving makes me less so.”

Here, at last, were answers, a way into the Mountain. A thrill of excitement ran through Clara, and without thinking, she threw her arms around the Fire Prince’s chest.
He drew back, raising both hands uncomfortably. Realizing whom she was hugging, she drew back as well, folding her arms over her chest. “That was an ‘I’m glad we’re finally headed somewhere,’ hug, not an ‘I like you’ hug, by the way,” she pointed out.
“Ah. Thanks for the … clarification.”

“So,” she continued, as he pulled out a package of beef jerky, “how’d a guy like you end up with the choice position of Fire Prince?” she asked, “beyond the obvious fact that you have matches.”
Andrew shrugged. “I’m still not sure. We were on a road trip, I was getting the car packed, and then there was a forest fire, and then I was here. I didn’t want to come here and be the Fire Prince if that’s what you’re asking. So, what about you? How’d you get to be the Water Princess? Beyond the obvious fact that you can fight.”
She snorted again, clearly amused by his decision to imitate her phrasing. “I froze to death,” she answered.
Andrew blinked. “Um … you…”
“Really?” asked Karlos.

The scene where Clara and Andrew meet and duel for the first time was probably my most prewritten scene (aka, I wrote it ahead of time to help pin down the feel of the characters, conflicts, and goals of the book) in Water Princess, Fire Prince. It went through a number of changes to pin down exactly how I wanted them to meet and it's actually the reason Clara became classics-obsessed and started quoting everywhere.

I stole the dihydrogen monoxide joke from my english workbook. #shameless

The scene where Clara becomes self-aware and comments on them being in a book is based on something I, myself, said, one day when I passed my younger siblings watching some sort of cheesy CGI movie. I don't remember what the movie was, only that I knew, then and there, that Clara would have to comment on movie magic at some point in the book.

Clara being in a circus was inspired by a real-life family that my mother read about at some point and told me about. I don't remember much about said family, except that they would take their kid with them onto the trapeze and toss her between themselves. Her being terrified of falling happened after a RP I let her play in, where she and Andrew got to go watch the circus due to some weird time funkiness, and she was freaking out. When I asked her why, later, she told me about the fall.

Andrew has resting frown-face. Like, straight-up. A lot of people comment on him being stern, scary, always frowning (not necessarily in this book, but Clara does mention it when she observes him asleep), but that's his face.

Also ... this is a thing. I don't know why people let me get away with it, but it's one of my favorite comparisons and contrasts between Robin and Clara.

(Every question you answer in the comments below is an entry to win one of the Rizkaland Legends in paperback, or all four - for a total of five winners. Giveaway is U.S. only. Don't forget, you could also win a copy of LaM by preordering the kindle edition!)
1. What are some of your favorite fantasy tropes?
2. If you're an ardent Clarand shipper ... at what moment do you think the ship sailed?
3. What's your favorite "old wives' tale" regarding romance (or any such stuff)?
4. Do you like it when characters lean on the fourth wall?
5. Any favorite quotes?
Knitted by Kendra E. Ardnek at 9:13 AM