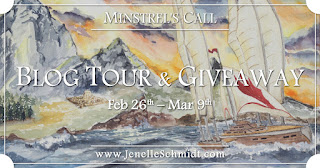 Yes, I'm aware that this post is way late, but I erased Monday from my memory and thought that yesterday was Tuesday. Even though I knew it was Wednesday. I'm sure you've never had a week like that.

I love this series, everyone should go read it.

Book Blurb:
War threatens. The game board is set. But the Minstrel is missing...

Advancing his growing power, the Dread Prince breaks free of his prison and brings a faction of dragons under his control, stirring unrest and hatred in the newly united kingdoms of Tellurae Aquaous.

When the dragon wards of Kallayohm are targeted in a ruthless attack, the High King travels there to administer justice. But the trial results in a crippling blow that leaves him reeling.

On the heels of defeat, an unexpected message from the erstwhile Minstrel arrives, pleading with his friends for rescue. Together, the High King and his companions must follow the fragile trail, braving peril and darkness that will test the measure of them all...

Book Links:
Amazon: https://www.amazon.com/Minstrels-Call-Song-Book-ebook/dp/B079CLZYZB/
Goodreads: https://www.goodreads.com/book/show/38524538-minstrel-s-call?from_search=true
Oh, and I get to interview Kamarie, who is my favorite character in the series.

So. You and Oraeyn? Would you kindly tell me a bit about your courtship and the three things you love most about him? (Yes, I'm slightly miffed that their relationship 90% happened during the time skip between books 1 and 3.)

Kamarie laughs and crosses her arms. “Well, Oraeyn and I didn’t start out on the best of terms. He really annoyed me at first, mostly because I figured he would get in the way of us having any exciting adventures. In all honesty, I aggravated him rather a lot, as well... he threw me in a river shortly after we started getting to know each other. But after that... well... we sort of gained a lot of respect for each other as our journey continued. That respect turned into friendship, and somehow, somewhere along the way, I realized that he was my best friend, and that I never wanted to go through life without him.” She gazes off across the room for a minute. “What are the three things I love most about him? I enjoy his sense of fun. He’s always surprising me with different idea of things to do. Picnics on the beach, rock-climbing in the Mountains of Dusk, exploring the Aura Wood, racing our horses, unexpected bouquets of wildflowers. I can’t believe I ever thought he might be the sort of person who didn’t love adventure! I also love that he listens to me. I mean, he really listens, and he is always there to help me if I need it, but he’s also willing to just listen and then let me try to solve the problem on my own if that’s what I say I want. And third, I just love how much he cares about everyone. He is always kind and respectful to everyone he meets, from the poorest farmer to the youngest servant to the highest noble to the king of the dragons... he treats everyone the same.” Kamarie laughs and continues, "Also, my author wishes to apologize for the fact that most of our romance happens between books! She says that romance is not her favorite thing to read or write, and that when she originally wrote us, she'd never been in love herself, and felt inadequate to the task. She actually left out our entire wedding except as a mention in the original draft of Yorien's Hand, but wrote it in later after a beta reader yelled at her about it!"

You're good friends with the young Yole. Care to tell me a bit about him?

Kamarie grins and leans forward. “Yole is like the brother I never had. He used to be like my little brother. He was someone I felt I needed to watch out for and protect. But he’s grown so much in the past eight years, and now he has really come into his own and seems to be finding his place in the world. I think he believes he’s sort of become my big brother, and thinks he needs to help protect me... I let him believe that... but just because he’s a dragon doesn’t mean I don’t still remember him as a scared little boy lost and wandering through the Mountains of Dusk!”


What would be your biggest piece of advice to any princess who wants to learn the sword?

“Ooh, that’s a good question. Well, I’m no expert, though I can definitely handle them. I would say that it would be good to get your parents’ approval. I should have done that... though I found out later that my father gave his approval to Sir Garen without my knowing it.” She shrugs, and gives a tiny, rueful grin. “And then I would say that you have to have patience, with yourself and your teacher. You can’t go into anything and just expect to be perfect at it - or even good at it - right from the start. We’re not all blessed that way by our fairy godmothers, after all. It takes a lot of practice, sore muscles, and getting knocked to the ground. But it isn’t about falling down... learning the sword, like most other things in life, is about whether or not you choose to get back up.” 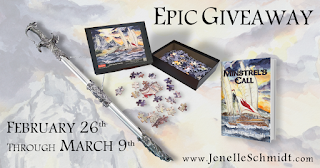 Tune in next time and maybe Kendra will feel a bit more chatty.