Some of you may or may not be wondering what happened to me, since I kinda dropped off of the blogosphere the last few weeks. Well, long story short, I went back to work. I'm again a redshirt at McDonalds (which means I'm going to die - 'tis a pity). I've also been up to my neck editing part 2 of Water Princess, Fire Prince, and writing book two. I've been doing quite a bit of reading, trying to stay caught up with my goal of 100 books for the year (though, currently, I'm two books behind ... which should rectified soon, since I have three books in various states of done)

Anyways, I'm here with an interview with one of my new author friends, Claire Banschbach. During the release party of My Kingdom for a Quest, she revealed the cover for her latest book, Wildcats of Braeton, and now it is (supposedly)* released.

I've revealed the prequel to this story here. However, while I was supposed to review this story as well, I haven't even read it yet, partly because of above schedule overload, and partly because the review copy I possess is PDF, and I like to read those in one sitting if possible. (And I haven't carved out a suitable one sitting yet.)

I thoroughly enjoyed the first book however, and it kept me up quite a bit past my bedtime - both from reading it, and from mulling it over once I was finished. I would describe it best as how The Horse and his Boy would have been written if G. A. Henty had been the author. It made for some boggy reading at points, but it was a good book nonetheless.

* More on this a bit later. Keep reading 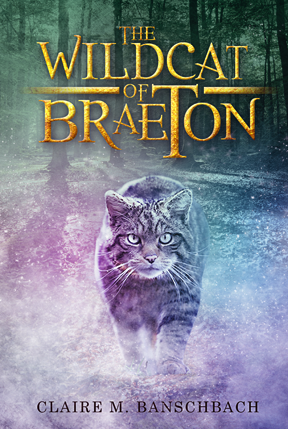 
About the book:
“If you’re fighting our battle, we’d best make you look like a champion,” Tam said to Aiden. Tam and Blair began to apply the war paint the Clans had worn into battle since before they arrived in Braeton.
“You ready?” Tam asked when they finished.
“As I’ll ever be,” Aiden replied. “Tam, if everything goes wrong, you take charge after me.”
“I’m praying nothing goes wrong,” Tam said. “Just remember what Diarmad said when he built this place: ‘In times of trouble, a Champion shall rise up and Scodra shall not fall.’”

His term of service to Lord Rishdah now complete, Aiden returns to his home in Braeton. As he travels he hears rumors that trouble plagues Braeton. Clan Canich is being attacked from within. He arrives, determined to save his father, his brothers, and his Clan from the treachery of one man.
A year has passed since the Calorins were driven from Aredor and Corin is struggling to rebuild his country. Despite the peace, a fear haunts him that the Calorins aren’t far away. The Hawk Flight takes to the forest again to defend the borders against a possible attack from the neighboring country of Durna and its Calorin ally.
As Aiden and Corin struggle to adapt to their new lives they know one thing for certain - war is coming to the North!


Claire Banschbach was born and raised in Midland, TX, the fourth of eight children. She was homeschooled through high school and is now a proud member of the Texas A&M University class of 2014. An avid reader of Lord of the Rings, Narnia, and many other adventure novels, Claire was prompted to begin writing her own fantasy novel at seventeen after several years of daydreaming. She continues to write in her spare time (and often when she doesn’t have spare time). When not scratching out stories and homework with pen and pencil, Claire partakes in the joys of watching the Boston Red Sox, Aggie football, playing volleyball, and horseback riding. She hopes her faith and strong foundation in God will continue to help guide her writing. She is currently working on her Doctorate of Physical Therapy at the Texas Tech University Health Science Center.

1. Hi! Welcome to Knitted by God's Plan. Would you mind telling us a
bit about yourself?
Thanks for having me! I grew up in west Texas with seven other siblings. I was homeschooled through high school and then went on to obtain a Kinesiology degree from Texas A&M. I’m currently working on my Doctorate of Physical Therapy through Texas Tech Health Science Center. I love to write and have two books now published! I love horses, volleyball, the Boston Red Sox, football, and eating hamburgers.

2. Where did you get the inspiration for Wildcat of Braeton and its prequel?
The main inspiration for the prequel The Rise of Aredor came from my love of Narnia. I’m still trying to find the magical door there. I started making up stories in Narnia and Middle Earth and then eventually decided to take one and make it my own. The Wildcat of Braeton came about because I realized that the Calorin Sultaan wouldn’t be happy with the way things ended in RoA and would do anything to achieve the outcome he desired. There is also a character in RoA named Aiden who I thought deserved his own story because he seemed to have a pretty good one. And my younger sister loves him. So she might have actually inspired WoB! ;)

3. Pick a random character and introduce him to us!
I’ll pick William because he’s kind of awesome. William is Aiden’s older brother and second son of Laird Gordon of Clan Canich. Will shares some of Aiden’s fiery temperament but learned how to temper it with some common sense much earlier than Aiden did. He’d do anything for his little brother and was devastated when Aiden ran away without telling him. When a foreigner begins to undermine the Clan, Will stands up to him and get banished for his pains. He decides to go find Aiden, who by now has been gone for six years. His plan? Find Aiden, bring him back, and save the Clan.
I really enjoyed writing him and seeing him and Aiden together.

4. What is your favorite thing about writing?
I really love it when characters decide to share things about themselves. Or when I’m struggling with a scene or the next plot point and suddenly it all falls together perfectly. Which is usually after a character drops a hint or two.

5. Can you tell us about any upcoming titles?
I do have a Christian fantasy series in the works. The first one is finished and undergoing some needed edits. I do want to get at least one more written before I start thinking about publication. My short sci-fi is most likely up next on the publication list. But it also requires editing. Here’s a brief synopsis of Worldjumpers!-
David Standish thinks he's in for another ordinary summer on his grandfather's west Texas farm. But that illusion is quickly shattered when Captain Zoey Blackheart crash lands in their backyard. One repair job later, David is signed on as a crewmember on the Saltador, a ship that can travel between planets through portals accessed by long forgotten technology. Captain Blackheart's past is racing closer with every job they complete and she, David, and her crew must stay one step ahead of her enemies. David is in for the ride of his life, making new friends and enemies and uncovering a plot that could destroy an entire planet!


6. What is your goal as an author?
My goal as an author is to write clean, faith based fiction that I can safely give to all ages. While I don’t think all of my stories need to be published, I hope I can share the ones that are the strongest. And if one of my stories touches the life of only one person, I think that’s pretty awesome and I couldn’t ask for more than that.

7. And, just for fun, what is your favorite flower?


Living in the great state of Texas, I’d have to say the yellow rose. But I do love seeing fields of Bluebonnets and Indian Paintbrush blooming the spring and early summer.

Giveaway!
Opens at midnight March 23 and closes at midnight on March 28. Giveaway includes 2 signed copies of The Wildcat of Braeton and accompanying sets of four notecard sized illustrations from the series!
http://www.rafflecopter.com/rafl/display/d11da96b1/

Release date info-
Due to circumstances beyond my control, the release date has been moved to (most likely) May. However, if you feel that you cannot live without this book, you can buy it here- https://www.tatepublishing.com/bookstore/book.php?w=978-1-68097-981-7 Warning- it costs about a hundred-million dollars (or I’m a poor college student and anything over $20 is expensive), so I would wait until its official release date and you can shop more cheaply! Stay tuned on my Facebook page or blog for more info on the release date!
Knitted by Kendra E. Ardnek at 7:00 AM