Gerta and the Geese - Part 1 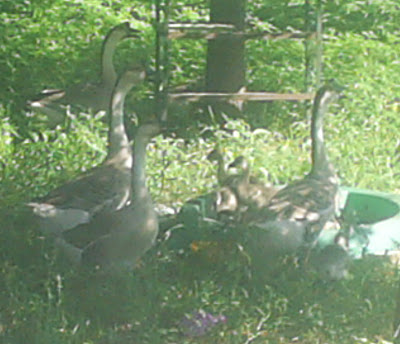 Gerta was not afraid of the dark. Gerta was not afraid of heights. Gerta was not even afraid of spiders. In fact, there was only one thing she was afraid of. Geese!
She lived on a small farm with her mom and dad, and her younger sister, Hallie. On the farm were chickens, goats, rabbits, and geese.
Every morning, while feeding the goats and collecting the eggs, she shuddered as she passed the gate to the goose pen. Her fingers would wander to the area just below her eye in memory of the bite one of the geese had given her when she was only six.
The goslings had gotten out, but couldn't figure out how to get back in. Gerta had picked one up and was starting to put it back in the pen when one of the geese flew up and tore off a patch of skin under her left eye.
Even at ten, the very thought of a goose brought pain to that area. It was usually only a dull ache and didn't last very long, but it was there.
Hallie, who was only five, was not afraid of geese. She would often tease Gerta about it.
"Gerta!" she would say, "There's a goose behind you," and then Gerta would jump and Hallie would laugh.
One day, when she walked by the goose pen, the gate was open and the geese were gone!