So, there's a goodreads fangroup that's been sitting in my invite list since the first book released. The Songkeeper Chronicles by Gillian Bronte Adams. See, I want to join, but don't feel like I should until I've read the books. Problem is, the Kindle editions are a smudge above what I can afford.

I mentioned that I hadn't read them yet - and desperately want to - in a different fangroup, and Deborah O'Carroll offered to lend me her copies of the books when we met up in the Author Meet-up last month (because she one of the girls I was meeting.) All I'd have to do is mail it back to her when I finish them.

I agreed, and eagerly cracked into Orphan's Song, the first book. To be confronted by the bellow. On the right is the opening of Orphan's Song, while on the left is the opening of Dragon Song, which I wrote about a year ago. (I need to finish DS, but ... Worth took priority. It's next in my Rizkaland spin-offs, though.) Feel free to click on these images to get them larger. 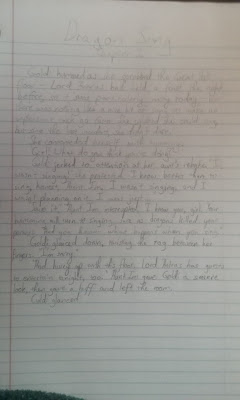 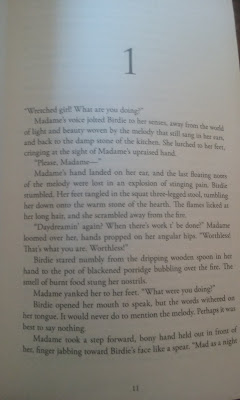 This aside, I've been quite enjoying the book, and it is very much not Dragon Song. Their openings are just eerily similar. (I'm now debating changing DS's ... but that was already an opening change and I like how it is right now ... if I can get past this speedbump that I hit.)

I'm about a third of the way through, now, and am quite intrigued. I'll join the fan group as soon as I finish, before I plunge into the second book.

I'm quite sure that the group is currently exploding. See, today's quite an important occasion.

See, the thrid book's cover is FINALLY being revealed. I know, I know, it feels like forever, and I only just got my hands on the books.

Wanna see the cover? (Hah, yep, I'm currently exhausted and preoccupied with edits, so I'm not going to tantalize you this go-around.) 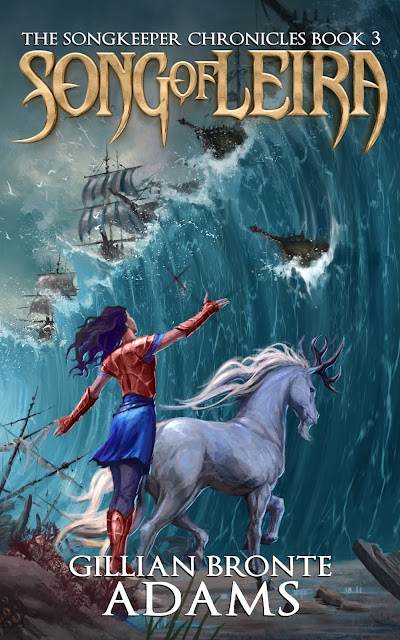 THE SONG BIDS HER RISE TO BATTLE

Reeling from her disastrous foray into the Pit, Birdie, the young Songkeeper, retreats into the mountains. But in the war-torn north, kneeling on bloodstained battlefields to sing the souls of the dying to rest, her resolve to accept her calling is strengthened. Such evil cannot go unchallenged.

Torn between oaths to protect the Underground runners and to rescue his friend from the slave camps, Ky Huntyr enlists Birdie’s aid. Their mission to free the captives unravels the horrifying thread connecting the legendary spring, Artair’s sword, and the slave camps. But the Takhran’s schemes are already in motion. Powerful singers have arisen to lead his army—singers who can shake the earth and master the sea—and monsters rampage across the land.

As Leira falters on the verge of defeat, the Song bids her rise to battle, and the Songkeeper must answer.

And, oh wow, that cover. That unicorn. The water. Her dress. THE SHIPS. The UNICORN'S HORN.

Eep. I need this book. I don't know if I can wait until June 5th when it releases - and I only just started reading the first book!


Its paperback is available for preorder, though.