Next to last of these! Would you guys like me to open up the floor for questions for the LDTD crew, once I finish? Or save that for later?

Oh, and please consider signing up for the blog tour for our Three Sleeping Beauty Retellings, and supporting our Thunderclap for it. 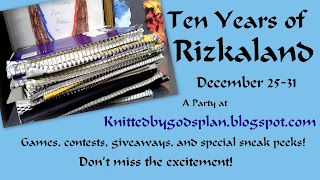 I admit it, I'm a bit apprehensive as Laura leads me through the twisting halls of Amber's castle. Sure, Laura has promised that Amber won't do anything to me, but niggling doubt still clings. I clutch my stack of questions tightly, hoping desperately that none are bad enough to make her want to add me to her collection of melted ice statues.

We end up in the dining hall, where Granite is waiting at the table. A feast has already been summoned, and I suspect that it was of Laura's doing, based on the spread.

"You can go ahead and sit down, perhaps ask Granite a few of the more sensitive questions while I fetch Amber," Laura tells me, and then she slips out the door.


I sigh and sit down across from the Dragon's husband. "Sarah Taleweaver would like to know if you realized it when Amber started turning towards evil or if you didn't notice until it was too late."

"You're starting with the difficult ones," Granite observed.

I shrug a bit but nod. "Best to get them out of the way, before Amber joins us."

He nods, the corners of his mouth turning up grimly. "I knew even as she first took up the scale that it would lead her to nothing but trouble. I had hoped that she'd be strong enough to resist, but even that first moment was too late." He gives a frustrated sigh. "I slew that terrible dragon myself, and had thought that I'd ussured in a time of peace and prosperity for Rizkaland - but I just exchanged a thorn in my side for a thorn in my heart."

I glance down, shuffling through my stack of cards. "Morgan would like to know if is hard to stay faithful to her when she's so evil."

He doesn't answer immediately, but the muscles in his jaw tightened. Finally, he shook his head. "She is my wife. I am bound to her. It doesn't make things easy, but I really have nowhere else to go. Nowhere else that I'd rather be. I just wish that she'd listen to me."

"Don't we all." I pull out another card, then frown and decide to combine it with another to save time, as I'm sure it won't take Laura too much longer to show up. "Amanda wants to know if you're okay being tied to Amber's immortality. If you think that the Tela Du will win the Final War, are you okay with dying, too? Alyssa would like to know what you think of the Tela Du."

"I think that she's a young lady with her work cut out for her," Granite answers, heavily. He shakes his head. "I can't imagine life without Amber. Corrupted though she may be, she is my wife, and I love her. It's not my death that I fear, it's hers, but they must come together."

Before I can press him with further questions, the door opens and Laura races in and takes her seat next to Granite. Amber sweeps in a moment later, eyes narrowing as they land on me.

"My eyes are blue, not brown, I'm not the Tela Du," I inform her. "I'm a historian here to ask a few questions."

Her eyebrow flickers, and her narrow gaze turns towards Laura. "I see."

"I know you aren't the fondest of historians," I insert, "but that is why I'm coming directly to you. To ask questions so that I may have your story. These questions are provided by the readers of one of my books, about the Water Princess and Fire Prince."

"Very well." With practiced flair, Amber takes her seat at the head of the table. "Ask away."

I take a deep breath and shuffle through my cards. "Amanda would like to know how old you were when you first became queen."

"I was sixteen when I slew my mother and took her throne," Amber answered. "As evidenced by the fact that my age is now frozen at sixteen."

I nod. "On that note, she also wants to know when was the last time you saw your birth mother."

"When I plunged my knife into her heart and took on her immortality," Amber answered. "Jade was a wicked woman, though, and it was time for her life to end."

"Mm," I say, for I happen to know a few things about the situation that Amber doesn't. "Ooh, question for Laura. Sarah Taleweaver wants to know what would happen if two of you were in a room together. She thinks time would collapse. And she asks, if it's safe, if you ever have?"

Laura tilted her head to the side. "I think she's already had this question answered for her in Lady Dragon, Tela Du."

"She has, but at the time of her asking ... I hadn't finished writing that. I've been ... slow with getting these posts written."

"I was late with getting you here," Laura counters. "But, to the question. It's perfectly safe, I've done it thousands of times, and the world is still intact. She's watched too much Doctor Who. To be honest, it's the TARDIS energy that makes interacting with yourself dangerous, not the actual interaction."

"I see. On that note, Abby would like to know if you prefer being the child or mentor to yourself."

Laura tilted her head to the side. "Mentor," she admits, "since we're talking about when I'm interacting with myself. I always prefer the second time through - I feel less pressure, even though I admit that there is usually far more on me that second time. But, on the second time, I know how everything will turn out. I don't have to worry about messing things up."

"Amber, one for you - Alyssa would like to know where you consider your home?"

"This castle," Amber answers automatically. "It has traveled with me through every world I have lived in - I am bound to it. It is my home."

"Granite, how about a more cheerful one for you? Sarah Taleweaver would like to know how you and Amber met."

Granite tilts his head to the side as he stared at his wife. "I can't remember a time when I didn't know her. My parents chose me at her birth for her future husband, and I was raised alongside her."

"Who were your parents?" I decide to ask a question of my own.

Granite shakes his head. "I was never told. My past was never important, only my future."

"She used a love potion on me," he answered. "Though she claims it wore off, I'm not convinced."

Amber rolled her eyes a bit. "It wasn't actually a real love potion, though that is how Laura described it when she gave it to me for my sixteenth birthday. It only acted on already-existing feelings."

"Yeah, but you didn't know that when you gave it to him," said Laura, tilting her head to the side.

"No thanks to you. You merely told me that the people of Milia used it as a love potion, but that it didn't always work. I gave it to Granite to test it since I already knew that I would marry him. I ... hardly expected the reaction I got out of him."

"Honestly, no worse than I've ever seen you since," Amber counters. "I will admit that it terrified me a bit, until Laura told me the truth about the potion. And you were thoroughly embarrassed when it did finally wear off. I won't say that that was how we fell in love, though, merely how we realized it."

"Oh, it totally was," Granite argues. "You pushed me off the cliff and I dragged you down with me."

She gives him a small smile, and I see, for a moment, the old Granite and Amber, before she was corrupted by the scale. But then her eyes harden and she turns back to me.

"So, any other questions?"