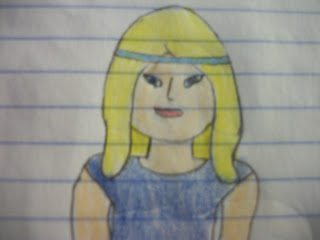 One of the biggest complaints I've heard about WPFP has been Clara, the female lead. She's stubborn, annoying, and doesn't seem to show enough emotions in the epilogue.

To be honest, I don't blame you guys. As much as I love the girl, she frequently gets onto my nerves, too. This post isn't a defense of her actions, but merely a dig into her psyce to show the WHY behind what she did and how she acted. There will be spoilers.

To start with, Clara is an ENFP, as am I. She leans a bit more to the J than I do, but that's the biggest difference between us. The common stereotype about ENFP's is that we're emotional people who wear our hearts on our sleeves. In truth, we're actually very private about our emotions. ENFP's have been called the most introvereted of extroverts, and it's because our F is actually connected to introversion, not extroversion. When dealing with people, we'd much prefer to use our abstract iNtuition. When we're not able to use intuition, we prefer to fall back on Thinking, not Feeling, when in social situations. Our emotions are OURS.

This is especially true of negative emotion. We like being happy, we like showing our happy face to the world. Negative emotion is usually channeled into physical activities, anger, or both.

And this is what Clara is facing at the beginning and end of the book. She's just been thrust into a new world, she can't be certain if the people there are telling the truth, or if they have a much more sinister plan for her than what they're saying. She's scared, but put into the limelight, doesn't want to show it. So she channels it into anger - stubborness in refusing to tell anyone about her true skills - and actions - by ... what she does with her instructors. By not taking her instructors seriously, she's also trying to raise her own mood by making fun of their plight - even if it's only mentally to herself.

The other thing you have to take into consideration is Clara's relationship with her mom. Clara is an only child, but her mom wanted more and Clara knows that. Clara's mom has also had several miscarriages, and Clara has watched her mom go through deep depresssions after every single one, and she knows, without a shadow of a doubt, that if she weren't to return, her mom might not recover. So while Andrew's drive was to get back and take care of the physical needs of his younger brothers, Clara was driven to getting back to take care of her mother's emotional needs.

And then, when she left Rizkaland at the end of the book, you have to understand: she had warning. Tnika Spoke of their departure back to Earth a few days in advance, and Clara had that much time to emotionally prepare herself for leaving Klarand. They had time to set their kingdom back in order, and to say good-bye to almost everyone they considered important - with exception of two of their children who were on a top secret mission at the time that will be important in book 6.

Everything was not suddenly yanked away from her, and she went of her own choice. She thinks she's okay with it. It won't be until later that night, or even a night or two later, when she's left alone in an empty bed, and it crushes down on her and she realizes that she's not.

But even when she first emerges from the water, there are little things - the fact that she doesn't stay with Kath and Rhoda, for instance, and instead seeks out her mother. Her mother is Clara's emotional buffer. As much as she enjoys Kath and Rhoda, they're not her confidants, and she rarely lets down her emotional walls around them. That's reserved for her mom.

And her mom knows what Clara's going through, she knows her daughter's reluctance to admit negative emotion - so after offering a few words of emotional encouragement, she offers her a way to channel her grief into physical action - a sword fight. This sword fight raises Clara's emotions just enough that she's able to face people again at the picnic where she is reunited with Andrew.

The emotions are there, just buried under a smile and a tease.

But if it makes you feel any better, she probably cried herself to sleep - if not that night, then the next night.
Knitted by Kendra E. Ardnek at 7:20 PM