Of Cinders and Swords

I told ya'll that I would try to publish CinderEddy this week. It didn't happen, and honestly I'm not sure when it will happen. Don't get me wrong - it's all set to go, and I thoroughly intended to publish, but Amazon and I are having issues. I'm not certain what these issues are, but it appears to be some sort of policy change, and getting around it will require me getting my business in my name instead of my dad's. (Yes, I have a business - and there's a crazy story why ... No. I don't feel like telling it.) I may be able to circumvent it in the short run, though. You see, I'm trying to switch all my books over to my own Amazon account (Because I was sixteen when I started, I had to publish under my Mom's account), and it's my own account that's giving me issues. Mom's might not, haven't tried, and I may transfer CinderEddy back to her account soon. We'll see.

But despite that, I'm going to show you the cover art today, let you drool, and entice you with a few snippets.

First of all, because I'm cruel like that, here's the working cover art that I used for the original short story. Fun piece of trivia - that sword is taken from what was my attempt at drawing a better cover art for Sew, It's a Quest. Go any lower, and there's a "Book 1" on the pommel of that sword. Any higher, and you'll run into
a box with title information. Any further to the right, and you'll find a needle.

I'm actually quite proud of that mock cover. It's only problem is that I made that box with the title information too small.

Anyways, you didn't come here to talk about Bookania (because CinderEddy is not officially part of Bookania. I suspect that it is - on the same level that Tears, Frogs, and Laughter is, but it's not an official part of the series), you came to see the cover for CinderEddy. 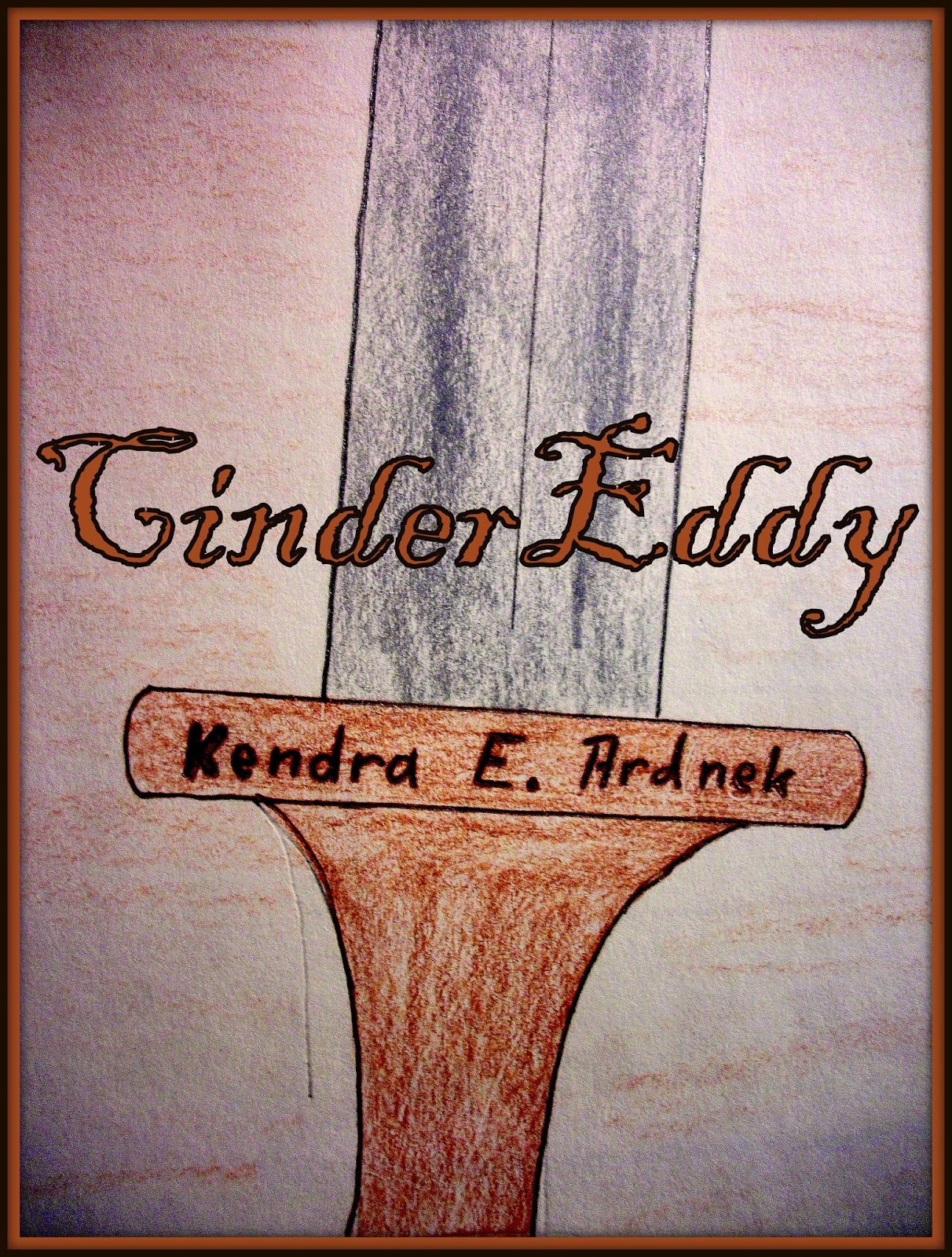 And yes, I used the exact same sword - I just ran it through more edits to make it look more professional. I'm quite fond of this myself.

Now for the blurb:

Edward, called CinderEddy by his stepbrothers, has been treated as little more than a servant ever since his mother died after her remarriage. When the Princess Elicia is kidnapped, however, his stepbrothers join the other knights attempting to rescue her, and Edward uses their absence to make his own attempt at her rescue. He doesn't expect to succeed, but somehow, he keeps finding himself on the right path.

I'm not quite as fond of that, but it explains the heart of the story. Let me know if it could use improvement though!

And now for snippets - however, since I just came from reading what would have been Kiri Liz's entry to the contest (Secret of the Hazel Tree. Like me, she hadn't finished the story in time to enter it, and unlike me, it was far too long anyways.), they kinda pale in comparison. I won't say that it is my new all-time favorite (Ella Enchanted holds that place irrevocably in my heart) but I think I now have a new second favorite. And the fun part is, our retellings both lean towards the Grimm's version of the story. (Mine is a very loose retelling, but while there's no official Fairy Godmother, it is while he's talking to his father's suit of armor that he decides to rescue the princess ... which is kinda like how Achenputten - Cinderella's name in the Grimm's version - received her dress from her mother's grave.) By the way, Kiri will be displaying this cover over at her blog as well.


"Well!" exclaimed James. "Then we must begin at once - CinderEddy!" He turned sharply to face Edward, a frown appearing on his face. "You're dawdling."
"Well, I - I was eager to hear the news as well, Sir James." Since the twins' knighting, Edward had been forbidden to leave the Sir off of their names, though they had done little to deserve the titles.
"Do you hear that, John?" questioned James in a sneering voice, as he turned to look back at his brother. "He was eager to hear the news." Then he looked back at Edward and added, in a dangerous tone, "The news does not concern you, CinderEddy. What concerns you is your work."


Edward hastily looked back down and pulled at the nearest weed, wishing he could dare remind them of his mother’s status.

For some time after that, Edward just roamed up and down the halls, wondering what to do with himself in his new-found freedom. At last he came to a stop in front of where Sir Hector had set Sir Henry's armor on display - the armor that had always been the nearest thing to Edward to actually having his father. How often had he snuck down here as a child after a beating? Edward knew not.

He drifted into thought for a moment, then snapped back to attention, turning to face the armor. "So how does that sound? I'd take a horse as well, but I think that that would cause too much of a commotion."
Since he got no negative response from the suit of armor, he decided that the answer must be in the positive.
Knitted by Kendra E. Ardnek at 7:27 AM