Hello readers! This is me talking for me at last, no more blog tours this month!

However, I am here asking permission to invade your blogs. You don't mind that, do you?

Okay, basically, remember the party I announced a few weeks ago? The Bookania/Blogoversary one? Well, basically I've come to the realization that I can't make it as big as I'd like AND release Lady Dragon, Tela Du on time, so I'm going to have to shave it down. I'm cutting out all of the contests, and basically reducing it to just character interviews, and just one post of my own on this blog. Haven't decided what this posts are going to be (they will include a snippets post and a "favorite Bookania pins" post, though)

And I am still planning the LDTD cover reveal on the 4th (I just need to finish editing these pictures my sister took for me so I can send them to my cousin) and the short story release (I know you guys voted Poison Kiss, but I think it may end up being Gift Exchange, under the sheer virtue that GE already has a gorgeous cover, and I don't even know yet what cover I want for Poison Kiss.) 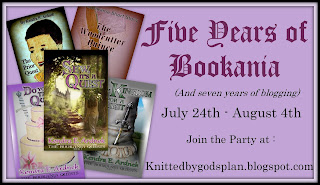 There will be two giveaways, though, with two separate ways to enter:

Have a character over to your blog for interview, and I'll enter you to win a complete physical collection of my books: The Bookania Quests, The Ankulen, WPFP, and the two collections. Seven books. Sounds awesome, yes?

The other prize will be a complete ebook collection of my books, which WILL INCLUDE the new short story, whichever it will be, an ARC of Lady Dragon, Tela Du, and up to three of my unfinished WIP's of YOUR choice. Entries for this one will include comments on my blog posts during the party, comments on any back posts with the Bookania label, comments on any of the character interviews, and any review you've written of any of my books.

(Already written reviews DO count. Reviews for the Bookania short stories are double points, and reviews for the three main books are triple points. Standard rules of "extra points for each location you post your review" and "email me with a list of the links to ALL of your reviews so I can count them" apply.)

Also, taking part in the cover reveal for Lady Dragon, Tela Du, will earn you five points for the ebook giveaway. The reveal is on August 4th, which is why that day has been removed from the interview sign-up.

Kay? Kay. Now I understand not everyone has read the Bookania Quests, so I'm going make a list of all of the characters I'm willing to interview, marking those that are already claimed (and I'll come back and mark more as they are claimed). Below the list will be a form for you to fill out, and I do ask that that two people who have already claimed characters to go ahead and fill it out so I can organize the information.

Each character will only be interviewed by one person, therefore, I've added the rule that if you've already interviewed a character in a blog interview in either Take or Kingdom's blog tours, you can't interview them again now. Let someone else have a go at asking them questions.

And, yes this is the character list from the back of Kingdom with a few other characters added. I don't believe in redoing work I've already done.

For those of you who have read the books and want to interview a character not on the list below, feel free to ask. However, at least two of your requests have to be from this list.

Also, check out the pictures I added to my Fan Art post last night. I have the best beta readers.